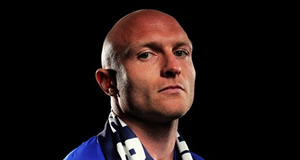 The Pink Paper quotes a police source as saying:

“We can confirm that a 45-year-old man from Mitcham Park, Mitcham has been charged with a section 4A public order offence [the distinct offence of intentional harassment, alarm or distress]…

“This follows an incident at Canons Leisure Centre in Mitcham on 6 May.”

It is the second known incident of a BNP candidate or supporter appearing in court charged with committing election week assaults, and folllows the indictment of Bob Bailey, BNP parliamentary candidate for Romford, who was filmed kicking and punching a young man on the day before the election.

Meanwhile, at the weekend it was reported that Leicester City defender Wayne Brown had boasted about voting BNP to his teammates.

The Mail reports that:

“Having returned to the dressing room after training, where a discussion was taking place between a group of players about the election results, Brown first told a stunned, racially mixed group of players that he had voted for the BNP.

“He was met with a volley of protest. But rather than defusing the situation, the player, born in Barking where BNP leader Nick Griffin was wiped out in the election by Labour’s Margaret Hodge, and the party lost all its council seats, launched into an abuse [sic] attack on against ethnic minorities whom he claimed were ‘killing this country’.

“The reaction was furious and several players pointed out that, not only were Brown’s phrases and views unacceptable, but that he had Asian, black and mixed-race colleagues.”

Brown, who was axed by boss Nigel Pearson for the Foxes’ play-off clash with Cardiff, is said to have “been forced to ask for forgiveness” from his teammates. He faces an uncertain future at the club, with Pearson making it clear privately that he “no longer wishes Brown to be a part of his squad”.