Schools funding, Sure Start children’s centres and 16-19 education were spared the axe this morning as George Osborne and David Laws announced £6bn of cuts. 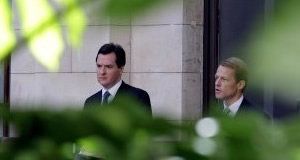 Earlier this morning, The Chancellor and Chief Secretary to the Treasury detailed £6.243bn of cuts in public spending that will, in the most part, take place in this financial year. As promised, departments of health, international development and defence saw their budgets protected. In addition, schools funding, Sure Start children’s centres and 16-19 education were also spared the pain of budget reductions. As a consequence the axe fell harder on a number of other departments, including business (£836m), communities and local government (£780m) and education (£670m).

Both men were at pains to point out that the majority of the savings would come from ‘reducing waste’, including over £1bn from less government advertising, use of consultants and travel allowances. The cancelling or renegotiation of contracts through more effective procurement is also due to save nearly £2bn, with £600m coming from a ‘bonfire of the quangos’.

However there are less politically salient casualties of the cuts. The abolition of the popular Child Trust Fund will save just over £300m, and the £120m generated by a freeze in civil service recruitment will hit graduate job-seekers particularly hard.

Credit must go to the Treasury team for delivering these savings in what appears to be a relatively equitable fashion across the public sector. Whether or not these cuts will help or hinder immediate economic recovery is anyone’s guess; however, it is clear that the motivation for today’s announcement is primarily to send a clear signal to international markets that this government is focused on reducing the deficit as quickly as possible, an objective that both parties now subscribe to despite pre-election disagreement.

This raises a very important question: to what extent do today’s cuts, and indeed the far deeper and more painful ones to come, reflect a view of how to rebalance Britain’s economy and find the future sources of economic growth, or alternatively simply represent a short-term approach to placating markets and particular political ideology? Given the significant cuts in the business budget, along with the squeeze in higher education spending with no apparent protection of science funding, it is not clear that these cuts are part of a broader economic plan for delivering the jobs of tomorrow.

Simply opposing government action on the deficit would be disingenuous and counter-productive. The focus for any responsible, strong opposition should be on ensuring that when cuts are deliberated or announced, their impact on the broader economy is carefully assessed. The challenge, but also the opportunity, for the Left is to develop and articulate an economic vision that is deliverable in today’s fiscal reality. On the limited evidence of today, the government is yet to decide on its own.

Some other interesting takes on today’s news:

“Scrapping the Child Trust Fund is a major backward step away from achieving greater equality in Britain. Campaigners have fought long and hard to establish the principle that the state should help families build up an asset to give all children a fair start as they enter their adult life. The spark provided by the Child Trust Fund has substantially increased parental saving since it was created in 2002 and meant children born since then will have a pot of money to help them get on in life when they reach 18. Now tomorrow’s generation are being asked to pay for the mistakes of today’s. We strongly urge the government to reconsider this step for the sake of building a fairer Britain.”

“In addition to decisions on growth, there are many decisions to be made on the best mix of reduced spending and increased taxation in deficit management. We should put more emphasis on taxation than the coalition, while being redistributive and imaginative, in terms of what we propose to tax. There are, for example, cases for revisiting land and carbon taxation, as Philippe Legrain has argued.”