For the first time, the general election could result in different parties, each with competing visions, leading each government in the devolved nations. 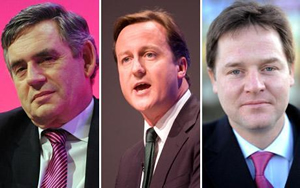 For the first time, the general election could result in different parties, each with competing visions, leading each government in Belfast, Cardiff, Edinburgh and Westminster. With the nationalist parties in Scotland and Wales feeling emboldened by the prospect of a hung Parliament, how the next Government addresses devolution could determine the fate of the Union.

• Will implement the recommendations of the Calman Commission, including greater tax varying powers for the Scottish Parliament. Labour would seek to take such proposals forward on the basis of consensus with Scotland’s main political parties.

• Following the successful vote in the Assembly, Labour would work closely with the Assembly and Welsh Government to oversee a referendum on greater law making powers for the body.

• In light of Gerald Holtham’s warning that Wales could be loosing out to the tune of £300 million under the existing Barnett formula, Labour has committed to “ensure that Wales is not disproportionately disadvantaged by the application of the central government funding formula.”

• Continue to provide the investment needed to support Unionists and Republicans in Northern Ireland to work together, in peace, for the good of the people.

• Speak of being proud to support the Union, and its electoral pact with the Ulster Unionist Party, rebutted in full in Tuesday’s posting on Left Foot Forward.

• Will publish a White Paper on future powers for Holyrood, including greater responsibility for raising its own revenue by May 2011. This is despite Labour having already published a White Paper based on the Conservative supported Calman Commission.

• The Prime Minister and other Government Ministers will subject themselves to scrutiny at Holyrood on a “regular basis”.

• Will not stand in the way of a referendum on greater law making powers for Cardiff Bay, but concludes, “our priority remains getting people back into work and strengthening the Welsh economy.”

• Will end the practice of “double jobbing” where someone can sit in more than one Parliament or Assembly at a time.

• In an attempt the address the West Lothian question, a Cameron led Government would introduce the principle of Scottish MPs being excluded from voting on legislation only affecting England. The constitutional expert, Professor Vernon Bogdanor has dubbed such a policy, “profoundly dangerous to the future of the United Kingdom.” (Page 35)

• Will grant new powers and responsibilities to Holyrood by implementing in full the recommendations of the Calman Commission.

• Support giving the National Assembly for Wales full, primary law making powers as is the case in Scotland.

• Establish a new “Finance Commission of the Nation” to come up with a new, needs based funding formula for the devolved nations to replace the Barnett Formula.

9 Responses to “Where they stand – Devolution”