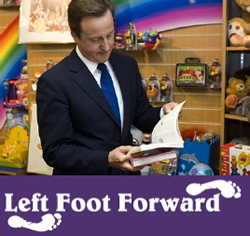 The Tories have today unveiled their £3 per week tax break for a third of married couples which they hope will reward commitment and family stability. But scratch beneath the surface on their commitment to the family and David Cameron has something to hide. Behind their rhetoric, the Conservatives are masking cuts and threats to the vital services that have helped families to help themselves for a decade or more.

In a research paper published today by Left Foot Forward, ‘Fami-lies: Why you can’t trust the Tories‘, Jo Cox and Will Straw outline how the Conservative party’s rhetoric on the family and the reality of their policy and voting record are at odds.

Tory proposals on the family include:

• A cut to Child Tax Credits for middle-income earners.

• A cut in Sure Start services which risks stigmatising those who use them.

• An end to universal free childcare entitlements for 3 and 4 year olds.

• All but the poorest families missing out on Child Trust Funds.

“David Cameron said that he wanted the next Government to be ‘the most family friendly Government we’ve ever had in this country’. That can only happen if Labour stays in power.

“The Tories have consistently opposed the introduction of popular family-friendly policies which make work pay, make work flexible and give the best start in life to kids – policies such as Child Tax Credits, Sure Start, and extensions to maternity leave. If they’re elected it is precisely these measures that will be put at risk.”

“At a time when public finances are tight the Conservatives are prioritising amateur attempts at social engineering instead of effective policies to help children out of poverty.

“Their costly tax break will increase the incomes of the poorest familes by just 0.03% and when you take into account their cuts to child tax credits and child trust funds, many families will be worse off.”