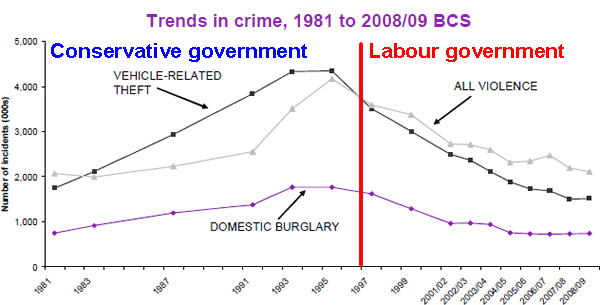 David Cameron yesterday echoed his discredited shadow home secretary Chris Grayling in refusing to accept crime was falling, saying police recorded crime not the British Crime Survey should be the measure – yet failing to accept that the recorded crime figures also showed a fall, down 7 per cent from 2008 to 2009. Recorded violent crime fell 3 per cent in the same period.

Cameron cited Grayling’s House of Commons “study”, the details of which he never released, saying:

“The House of Commons library has just done a very good piece of work to show that if you look at actually violence against the person, and we all feel that actually we’ve become more violent and there have been problems with particularly anti-social behaviour and drink related violence, violence against the person has gone up by something like 40% on a consistent basis according to these House of commons figures.

“So the first thing is don’t try and soft-soap the public. Try and give them an accurate picture which is a mixture of the British Crime Survey and real figures.“

An “accurate picture”, however, is something the Conservative Party leadership, and scaremongering Tory candidates, have consistently failed to give. As the graph below illustrates, violent crime, vehicle-related theft and domestic burglary have all fallen steadily since 1997, following their peak under the last Tory government.

Home secretary Alan Johnson called on the Conservatives to accept crime was falling:

“Why can’t David Cameron admit what a retired police officer asked him to admit today [yesterday], which is that crime is falling? The statistics watchdog has told his shadow Home Secretary to stop misleading the public but they can’t resist. Two years ago Cameron was prepared to admit that crime was falling, but now we are in an election campaign he has gone back to denying reality.

“The British Crime Survey is one of the most reliable surveys of crime in the world, set up by the Tories themselves in the early 1980s. Criticising it by saying it doesn’t include murder is ridiculous – but, for the record, the murder rate is the lowest for a decade.

“Last week’s crime figures reinforced the great work that the police, PCSOs and their partners like the man who confronted Cameron today have been doing. Labour is proud to support them – we know there are still problems including binge drinking and problem families, but we are determined to tackle those problems rather than talking them up to run Britain down.”

In an interview with the BBC’s Nick Robinson in 2008, Cameron did indeed admit crime had fallen, an admission he and Grayling are reluctant to repeat. Cameron had said:

Last week there was further evidence violent crime was down, with accident & emergency admissions for violent incidents – an indicator referred to by Liberal Democrat home affiars spokesman Chris Huhne on the Daily Politics home secretaries debate – down in the last year, showing the same downward trend as the BCS and police recorded crime.

Since Labour came to power, violent crime has fallen by 41 per cent.

18 Responses to “Tories still refusing to admit crime is down”