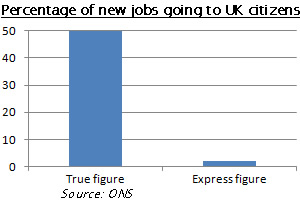 Today the Express (using data published by the Spectator) has claimed 98 per cent of jobs created in the UK since 1997 been taken by migrant workers, leading the Conservatives to state that:

“British workers [are] in a worse position than when Labour took office 13 years ago.”

This conclusion is significantly wrong.

An analysis (figures can be downloaded from the ONS) that considers all jobs in the UK, and is broken down by nationality not by country of birth, shows a very different picture – finding that 50.3 per cent of the jobs created since 1997 have been taken by UK nationals (around 1,375,000 positions), and that employment rates for UK nationals remain at the same level they were in 1997 – despite the sharpest global downturn since the 1920s.

In contrast, the analysis that has been used by the Spectator:

• Conflates “non-UK born” with “nationality” – there are many (around 1,432,000) non-UK born British nationals, excluding them from the analysis is to exclude five per cent of the UK labour force.

• Excludes UK workers over state pension age – a method that excludes 1,419,000 workers. There is no good reason for omitting this group – they are included in ONS’s widely reported analysis of total employment levels in the UK and comprise around five per cent of the workforce.

The proportion of people in the UK population who were born in other countries has been rising consistently since the 1950s – as new migrant communities settle and their children enter the labour market the proportion of non-UK born British nationals will continue to increase. And as the Home Office acknowledge, the UK has some specific skills shortages – which mean that while it is vital to continue to enable workers in the UK to build their skills, it is also economically sensible to enable non-UK nationals to work in the UK.

Since 1997, unemployment rates have reached some of their lowest levels for 30 years, and even after the recession they remain low relative to other recent downturns. Research has consistently shown that, overall, migration has increased the number of jobs in the UK and raised levels of pay (although the effects may be very small).

It is absolutely true that are important policy discussions to be had about how the next Government can continue to improve skill levels among workers in the UK (new rights to request time off to train are the most recent in a long line of Labour measures) and the role that strategic industrial strategy should play in increasing good quality private sector jobs. There is also more that can be done to support communities experiencing sudden large-scale change as a result of migration. But a sensible debate about immigration needs to deal with the facts, and should not distort figures to make political points.

155 Responses to “The Express is wrong: Half of all new jobs have gone to UK citizens”