The BNP is so short of support it has resorted to using candidates masquerading as regular voters to spread their bile. 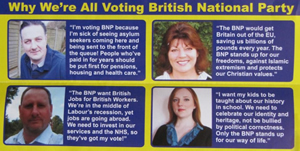 The BNP is so short of support, unable to muster enough members of the public to appear on their hate-filled leaflets it has resorted to using candidates masquerading as regular voters to spread their message of hate. All four “voters” pictured on BNP PPC for Tunbridge Wells Andy McBride’s election leaflets are BNP parliamentary candidates – three of them councillors.

As the “Vote No To The BNP” blog says:

“At the very least voters in the areas where these leaflets are being distributed should be made aware that the person claiming to be a British National Party voter is in fact a candidate standing for the party in another area of the country.

“The British National Party (BNP) seem to be intent on deceiving British voters in whatever way they can, and it doesn’t say much for them that they have to use their own candidates to pose as ‘voters’ in election materials, can they not find real people who actually want to vote for them?

“It seems the BNP never learn in their attempts to fool the public by using fake supporters, in recent months the BNP have used another candidate to pose as a soldier whilst out campaigning with Nick Griffin in Barking and they have also been using an American family to pose as British voters in their election materials.”

Though the BNP’s tactics are disengenuous, deceitful and misleading, “they are not in breach of Electoral Commission law,” a spokesman for the commission told Left Foot Forward.

Hat-tips: Vote No To The BNP, The Straight Choice and Hope Not Hate.

32 Responses to ““Real voters” on BNP leaflets are all candidates”