All parties have promised to be progressive in power, but by 2014 how will voters be able to judge whether the Government – whoever it might be – has delivered? 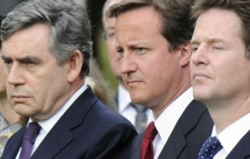 Our guest writer is Ed Wallis of the Fabian Society

This was the week the parties finally set out their plans for government in their manifestos. All parties have promised to be progressive in power, but by 2014 how will voters be able to judge whether the Government – whoever it might be – has delivered?

To get behind the rhetoric, the Fabian Review has asked the experts: Michael Marmot, Richard Wilkinson, Kate Pickett, Jonathon Porritt and others to set fair tests of progressive success in the key policy areas. We think these are good tests that people can come back to over the course of the next four years and use to access the achievements or otherwise of the Government.

They are set in good faith and based on goals that all the parties have said they share. Whoever wins on May 6 we will have a government that calls itself progressive; so it is important to have some independent, evidence-based benchmarks to evaluate these claims. The tests are outlined below and you can read the whole feature online and in the Fabian Review, published on Monday 19 April.

Are these the right tests? Are they achievable? Are they fair?

All the main political parties have a commitment to reduce health inequalities. The experience of the last decade shows how hard this will be to achieve. Any government committed to reducing the health effects of social and economic inequalities will have to find a new whole of government approach.

The Test, set by Sir Michael Marmot, Chair of the Strategic Review of Health Inequalities in England Post 2010 (Marmot Review):

It may take a generation for important social changes to show up as reductions in inequalities in life expectancy. The test, therefore, is the degree to which a new government puts in place a cross-department strategy to deal with the 6 major domains that cause inequalities in health: early child development, educational performance, employment and working conditions, sufficient income for healthy living, sustainable and healthy neighbourhoods, action on prevention across the social gradient. Reductions in inequalities in all of these should be monitored and show progress in the direction of greater fairness.

2. Are fewer children in poverty?

David Cameron has committed the Conservatives to meet Labour’s new target of eradicating child poverty by 2020. But for MPs elected this year, 2020 may as well be in the next geological period and there is a danger that the target will be warmly supported but progress toward it in the next Parliament will be negligible.

The Test, set by Martin Narey, Chief Executive of Barnardo’s:

Any government remotely serious about meeting the 2020 target of eradication will have to demonstrate significant progress during the next Parliament. So, by 2015, the absolute minimum requirement would be to reduce the proportion of children living in poverty in the UK (26 per cent in 1999) from 18 per cent now to 13 per cent (the missed 2010 target set in the optimistic days of 1999).

3. Is the economy greener?

Labour has set ambitious carbon reduction targets but the lack of any meaningful international agreement at the Copenhagen summit has left the Government’s green credentials exposed. The Tories have scored points with environmentalists by opposing Heathrow expansion and supporting high speed rail but lasting green credibility requires more than symbolic policy shifts: it must see Britain fundamentally reshaping its economy to reduce emissions.

The Test, set by Jonathon Porritt, founder director of Forum for the Future:

In an effort to keep global temperature rise below 2 degrees, the UK has set a target of cutting CO2 emissions by 34 per cent of 1990 levels by 2020. By the end of the next parliament, a progressive government would need to be well on its way to meeting this – and have reduced them by at least 20 per cent by the end of the Parliament.

Despite the debate over whether Britain is ‘broken’, all political parties now agree that Britain’s recent high levels of inequality have had profound negative social consequences. But whilst the left retains a faith in the state’s ability to improve the lot of the poorest and the right places its faith in the family, the need to repair the social fabric through constraints on runaway top salaries and the bonus culture receives less attention.

The Test, set by Richard Wilkinson and Kate Pickett, co-authors of The Spirit Level and are co-directors of The Equality Trust:

Compared to many other developed countries, Britain has a high level of income inequality, with the richest 20 per cent having incomes at least 7 times higher than the poorest 20 per cent, leading to our comparatively poor performance on levels of mental health, teenage births, imprisonment, drug abuse, social mobility and more. By the end of the next Parliament, the reduction of inequality should be established as a national target and the ratio of the incomes of the top 20 per cent reduced to no more than 5 and a half times the incomes of the bottom 20 per cent.

All politicians are explicit in their desire to give people more control over their lives; what this means in practice is often more opaque. However the question of control at work is the crucial measure of power here and, given both Tory and Labour’s rush to embrace mutualism, provides a real test of whether progressive political posturing will come to anything in practice.

The Test, set by Richard Reeves, director of Demos:

Creating more equitable models of the firm is a key route to empowering people in the work place. If this was really a political priority, it ought to possible to quadruple the paltry 2 per cent of UK firms that are currently employee-owned. By 2014, a progressive government should use a range of tax incentives, advice support and venture capital funding to increase the current figure by at least four fold to 8 per cent of the economy.

‘Recapitalising the poor’ is the totemic project of progressive conservatism. Labour’s policies such as the Child Trust Fund and Savings Gateway have shared this goal but have failed to reverse the inequality in ownership of wealth in Britain. An obvious benchmark for a progressive government must be that steps to redress have been taken.

The Test, set by Phillip Blond, director of Respublica:

In 2003 the bottom 50 per cent of the population owned 1per cent of the nation’s wealth; by the end of the next parliament a progressive government should have at least doubled this.

4 Responses to “Progressive benchmarks for the three parties”