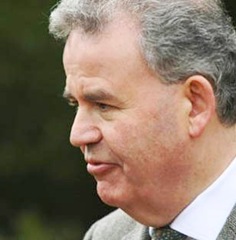 The Independent‘s front page reports that “Cameron urged to sack MP who questioned age of consent”. The paper reports comments by shadow defence minister Julian Lewis of the “serious physical risk” of teenage boys catching HIV from homosexual sex – a story was first reported by Left Foot Forward on Tuesday. Last week Mr Lewis wrote to a constituent saying he had been “very strongly against” lowering the age of consent for gays from 18 to 16 because of the “seriously increased risk of HIV”. He appeared to compare it with the decision to prevent service personnel aged under 18 from fighting on frontlines. He reiterated the remarks at a hustings event on Monday, prompting the story by this blog.

Knives are out for Nick Clegg as the right-wing press turns on him ahead of the second debate in Bristol this evening. The Daily Mail reports his “Nazi slur on Britain” digging out an article he wrote while a Member of the European Parliament in which he said, “All nations have a cross to bear, and none more so than Germany with its memories of Nazism. But the British cross is more insidious still.” The Daily Express examines “Clegg’s crazy immigration policy” saying the policy was “exposed as madness yesterday” after Clegg faced a grilling by the experts of BBC Radio 1’s Newsbeat. The Daily Telegraph details a potentially more damaging story about monthly £250 “payments into his private account” from three donors. The arrangements were described by Sir Alistair Graham, the former chairman of the committee of standards in public life, as “irregular”. But a party spokesman said, “The donations were properly made and declared”. The Sun piles in calling Clegg a “Wobble Democrat” and says he is “accused of [a] u-turn on Afghanistan” after the Lib Dem party conference issued a demand to the Government to “focus on concluding the Afghanistan mission and to report to Parliament on progress towards a withdrawal.”

A separate front page story in The Independent covers Nick Clegg’s “ultimatum” that “only proportional representation” will satisfy the party in a coalition. The Lib Dem leader condemns Mr Cameron for telling people to vote Tory to stop Labour clinging on to power under first-past-the-post. He claims it reveals “a profound identity crisis”, accusing Mr Cameron of using “camouflage” while claiming the mantle of change. Meanwhile, in a front page interview in the Times, David Cameron defended the first-past-the-post voting system – “refusing to accept that reform would be inevitable if there was an indecisive result on May 6.” The Tory leader also said that an indecisive result would put Britain’s credit rating at risk.

The Tories’ designated Clegg-basher in chief is Ken Clarke who writes separate comments articles for The Sun and Financial Times. In the FT he says, “Nick Clegg is a perfectly nice chap but he is not a prime ministerial candidate … his policy base in this election is very, very weak.” He goes on to speculate on the election outcome and reiterates remarks he made yesterday morning: “A hung parliament … would be a tragedy. The uncertainty would kill the recovery… If the British do not vote in a government with a working majority, and the markets conclude we cannot tackle the debt and deficit, then the International Monetary Fund will have to do it for us.” But the Guardian reports that the IMF yesterday boosted Labour’s economic approach. In its influential World Economic Outlook, the IMF said, “In most advanced economies, fiscal and monetary policies should maintain a supportive thrust in 2010 to sustain growth and employment.” Even the Telegraph admits that the IMF is “in line with Labour’s view”.

The Guardian reports on its own environmental policy debate in which the three party’s environment spokesman clashed. Labour’s Ed Miliband and Lib Dem Simon Hughes focused on Conservative councils’ opposition to wind farms; Miliband – supported by Tory Greg Clark – attacked the Lib Dems for “ducking” difficult issues like nuclear power; and the two opposition parties turned on Miliband for his support of the planned expansion of Heathrow airport. But Mr Clark was forced to deny his party wants to expand another airport in the south-east – “an idea supported by at least one shadow cabinet colleague and the Tory London mayor Boris Johnson.”