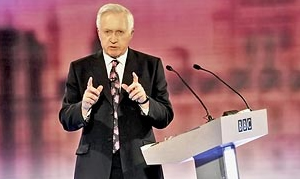 • Once again the leaders’ debate dominated the week’s news. The third and final TV debate took place at Birmingham University on BBC1 last night, watched by an average audience of 8.4 million people and a peak of 9.1 million. The figure was more than the 4 million who watched Sky’s debate from Bristol last week, but less than the average 9.4 million who watched the opening debate from Manchester on ITV two weeks ago.

The poll of polls all called it for David Cameron with 38 per cent, against 32 per cent for Nick Clegg, and 26 per cent for Gordon Brown. The papers also gave it to the Tory leader – and not just on the right. Jonathan Freedland in The Guardian wrote that Cameron was “on his way to No 10”, and Michael White scored it Cameron (8/10), Clegg (7/10) and Brown (6/10)

David Miliband, however, tweeted: “Interesting that sky poll of radio listeners to debate thought GB won” – interesting, though I don’t suppose Gordon will be overly delighted with comparisons to Nixon.

• The other main story was the prime minister’s encounter with Rochdale pensioner Gillian Duffy, whom he called a “bigoted woman” on Wednesday. He tore up his schedule, drove back to her house and apologised to her in person, but not before having to endure the pain of a radio interview in which his private comments were played back to him.

You’d think an apology would be the end of it – but not for the Murdoch press, who tried to entice Mrs Duffy into selling out to them, as today’s Independent reveals after Left Foot Forward speculation on Wednesday evening. Egged on no doubt by David Cameron’s spin chief and former Murdoch lackey Andy Coulson, The Sun reportedly offered her up to £75,000 for her story, yet, as the Indy put it, she “refused to dance to the anti-Brown tune”.

Just as with their spiking of a poll showing support for Nick Clegg, The Sun refused to run the story because it “wasn’t interesting enough”. Next Left reports that The Sun also failed to report a poll which found that 50 per cent thought the gaffe a “storm in a teacup”. You really couldn’t make it up!

• The start of the week was dominated by the Tories’ scare tactics, negative campaigning and fearmongering over the “threat” of a hung parliament – just a week after David Cameron said it was “disgraceful to try and frighten people”. Tut tut Mr Cameron!

On Monday, Left Foot Forward’s man in the City Varun Chandra appeared on Channel Four News to rebut the Tory spin. He said it was “fear-mongering hyperbole to say ‘the country’s bankrupt'” and explained to the watching millions that the markets were quite “comfortable” with the idea of a hung parliament, as evidenced by a recent Goldman Sachs report.

Varun also pointed out that the equity markets had gone up, the cost of government had remained steady, and sterling had strengthened against the euro and dollar. Slam. Dunk!

The “Don’t Judge My Family” campaign, who this week submitted a letter – signed by 70 widows and widowers – to The Daily Telegraph, and produced a heartwarming video. One of the campaigners, Sarah Milne, wrote an article for Left Foot Forward expressing her opposition to the Tories’ marriage tax plans:

“David Cameron has said the financial incentive of the tax break is less important than his desire to give the message that marriage is central in his aim to create a ‘we’ rather than ‘me’ society. It is this ‘message’ that worries me the most…

“A follower told me on twitter that she doesn’t think the Conservative ideas necessarily prejudice against families like mine. I disagree. Once a government sends out strong messages concerning whom it values and whom it doesn’t it will be picked up in the media and become absorbed into the public consiousness…

“A comment has been left on You Tube saying the families shown in the campaign film demonstrate that “Embracing change is positive and empowering for us as individuals and as a society generally”. I really don’t understand why the Conservative Party don’t agree. They seem to want to take us back to the days when only one kind of family was acceptable and it worries me.“

You can view the video here.

“Bigots” of the week

Sacked Tory PPC Philip Lardner and his gang of apologists. Lardner was fired by David Cameron for writing homosexuality was “not normal”. He is not the only senior Tory to hold such extreme views; shadow defence minister Julian Lewis and shadow home secretary Chris Grayling have made homophobic remarks recently – though neither of them was dismissed by Cameron.

Lardner received a deluge of support from grassroots Tories on the Conservative Home blog, among them a Tory MEP and several Conservative Party councillors and candidates. Lardner is also closely linked to another Scottish Tory PPC with questionable views, Richard Cook, Scotland director of the Campaign Against Political Correctness. Cook thinks nothing of “blacking up” and calls people who object “oversensitive”. He remains a Conservative Party candidate. The Institute for Fiscal Studies this week produced a detailed report outlining the gaps in the parties’ deficit reduction plans, warning of the severest cuts for decades whoever forms the next government.

Beyond the headlines the IFS revealed that the Conservative party’s flagship policy to cut the planned rise in National Insurance is regressive and would benefit individuals further up the income distribution.

The graph shows that, relative to the Labour and Liberal Democrats’ policies, the National Insurance cut would benefit those towards the top of the income scale to a greater degree than those at the bottom.

This week, Conor talks Elvis, Gillian and Peppa, investigating the disappearance of the people’s pig, as Tony Blair likes to call her…

According to our friends at Tweetminster, the main story this week is, of course, the leaders’ debate, which saw an increase in activity compared to the previous week. While the total number of tweets and tweeters didn’t reach the volume of the opening debate, it registered the highest peak of the three, with 51.7 tweets per second posted as the leaders debated immigration.

Other stories to trend this week included “bigotgate” and the furore over Kerry McCarthy’s tweeting of postal vote results.

Here are some tweets on last night’s debate:

@Annie_JG: #BBCdebate just a bunch of bitching, cameron’s a joke!

@matthewbuckland: #bbcdebate Cameron getting nailed in the debate

@seanjoshuadyer: why aren’t my parents watching the #bbcdebate? Do they not care about my future?

@NigelQuinton: I believe that if Dave wins the #bbcdebate (on the biggest issue) Number 10 will be his for the taking! #GE10

@DorindaDorinda: #election #bbcdebate The parties were so worried about gaffes&insistent on roles as a result.The candidates have proven they gaffe anyway!