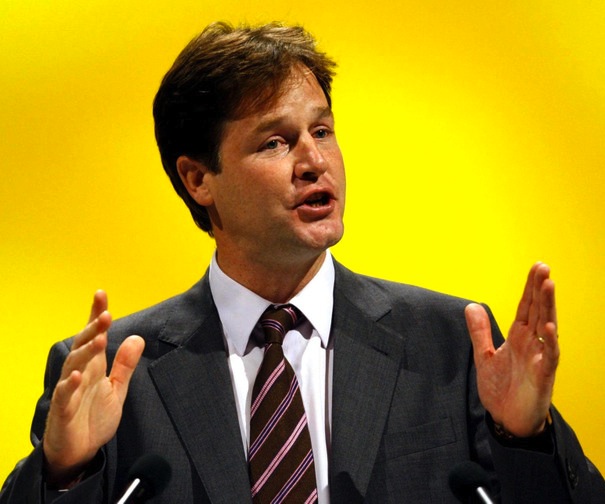 Coalition speculation dominates today’s media. The focus has been on Nick Clegg’s remarks on Andrew Marr yesterday which the Guardian have interpreted to mean that he would not “prop up Labour if they become third“. They have been partly misinterpreted and it is a different red line of Clegg’s which should be remembered.

On his Mark Reckons blog, Mark Thompson this morning sets out why Clegg could be playing a “deadly game against the Tories” in making clear that “a vote for Clegg is not a vote for Brown”. He bothers to quote Nick Clegg’s remarks on the Andrew Marr show:

“It is just preposterous the idea that if a party comes third in the number of votes, it still has somehow the right to carry on squatting in No 10.”
“A party which has come third – and so millions of people have decided to abandon them – has lost the election spectacularly (and) cannot then lay claim to providing the prime minister of this country.”

As Alan Johnson makes clear, “it doesn’t take a genius to think that if you are third in the popular vote, then … you are not best-placed to deal with it.” If Labour comes third, even if they had the most seats, it is hard to see how Brown could stay in Number 10. Does that therefore imply that a Cameron-Clegg coalition is an inevitability?

Guido Fawkes last weekend set out a May 7 scenario. It has a number of wonderful touches including “back-channel communications between Samantha Cameron and her third-cousin at Buckingham Palace” but misses out one critical ingredient: changing the electoral system. Mr Clegg has said that electoral reform is “non-negotiable” and in a hung parliament it is unlikely that any public support would remain for first-past-the-post. But in his press conference this morning David Cameron said, “I don’t want the electoral system to change. That would be a big, big mistake for the country.” The Times sets out why he has such a strong line:

“It seems clear that Mr Cameron would struggle to carry his party even if he wanted to put electoral reform on the table in talks with the Lib Dems. Two of his Shadow Cabinet were members of the All Party Group for the Continuation of First Past the Post in the last Parliament and other senior Tories said that any offers of reforms would be limited in scope…

“A survey of grassroots opinion also found little enthusiasm for a Lib-Con pact yesterday. Just 12 per cent of activists responding to a Conservative Home survey said that such an arrangement would be either acceptable or desirable.”

Although Jackie Ashley thinks a “Conservative-Lib Dem coalition is most likely” she also lists the problems it would face on Europe, Trident, immigration, and redistrbution before concluding “The more I look at the prospect of a Con-Lib coalition, the more I think it is not sustainable for long.”

Almost anything could happen after May 7th but three scenarios have not been given a proper airing. If Labour comes first or second in the popular vote (and therefore, in all likelihood, have the most seats), Gordon Brown has every constitutional right to stay on as Prime Minister and invite the Lib Dems to join a reform government intent on changing the electoral system and ushering in a new era of progressive politics. If Labour came third, the tables could be turned with Nick Clegg inviting Labour Ministers to join him in a Lib-Lab government with a similar agenda. Neither of these scenarios contradict Clegg’s formulation on Andrew Marr.

By contrast, David Cameron’s remarks this morning seem to place the Lib Dems and Conservatives at odds on arguably the defining issue of a post-hung parliament settlement: electoral reform. A coalition involving Clegg and Cameron could could probably happen in one instance: if Nick Clegg decided to put personal ambition ahead of party unity. This would make him his party’s Ramsay Macdonald (perhaps as Cameron’s Home Secretary) while Vince Cable could play the role of Philip Snowden and become Chancellor.

22 Responses to “Lib-Con coalition? Only if Clegg does a Ramsay Mac”