Left Foot Forward has received a letter of complaint from the anti-gay Tory Julian Lewis about our reporting of his remarks about the homosexual age of consent. 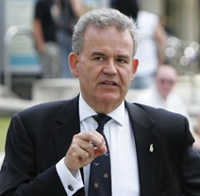 Left Foot Forward has received a letter of complaint from the office of Tory shadow defence minister, Julian Lewis, about our reporting of his remarks about the age of consent for homosexual couples. But our account of his remarks and his own expression of his views are almost entirely consistent.

“Julian was concerned to see the incomplete and inaccurate account of what he said at a recent meeting. What he actually said was exactly the same as what he wrote in the enclosed letter recently sent to a constituent.

“It was particularly misleading of your informant deliberately to leave out the fact that, on a free vote, he voted in favour of the Civil Partnership Bill.

“We know that yours is a left-wing website, but we would like to think that you have enough respect for the truth either to remove the inaccurate account or to balance it with the contents of this letter and its enclosure”

Our “informant” Andrew Tindall has defended his own account on his own blog where he said, “I disagree with Julian Lewis’ claim that what I have said was ‘both incomplete and inaccurate’.” Here we put Tindall’s account alongside Julian Lewis’ letter to a constituent, which we have been sent, so that readers can make up their own mind. In an email to Left Foot Forward, Andrew Tindall wrote:

“Questioned on his gay rights votes, he continued his claims that homosexuality/anal sex alone poses risk of HIV/AIDS, and that is why he still opposes gay sex at 16. Someone put it to him that it is no more dangerous than any sexual activity, to which he insisted on proof, but when asked to do the same – over 10 years after he already made up his mind – he said he didn’t have figures and it would have to be a project to find them.

“He then made a comparison that gay sex is as big a health risk as joining the army, and that they don’t let people join the army until the age of majority, so why should gay sex be allowed at 16 if joining the army isn’t.”

In a letter to a constituent, cited in a front page story in Thursday’s Independent which followed our scoop, Dr Julian Lewis wrote:

“I was very strongly against lowering the age of consent from 18 to 16. My reasoning was that there is a seriously increased risk of HIV infection from male homosexual activity. When it comes to legalising practices that involve serious risk, I believe the higher limit should apply. This is the reason we no longer allow 16 and 17 year-olds into frontline situations in the armed forces, for example.”

“On the other hand, (though no-one seems to have noticed), I voted in favour of the Civil Partnership Bill. One of the criticisms commonly made of gay relationships is that very often they do not last. It therefore seems obvious to me that, when a gay couple wish to commit to each other, by forming a permanent relationships, they should be encouraged and assisted in every way. We are talking here about adults, and thus my reservations about the age of consent issue do not apply.

“I wish to avoid the cliché which begins ‘some of my best friends are… ‘ but it happens to be true that my partner, Fiona, and I do indeed have gay friends including a couple who recently contracted a civil partnership. I am glad to say that they intend to vote Conservative!

Readers can make up their own minds about the accuracy of Andrew Tindall’s account but they may also like to know that, according to the Independent:

“Dr Lewis, 58, has a history of voting against legislation enshrining gay rights. He opposed adoptions by gay couples and also battled against the repeal of Section 28 “

Dr Lewis is clearly entitled to his own opinion and to vote however he sees fit – as My Gay Vote showed last week he will have found plenty of support for views from Conservative colleagues. But David Cameron has little credibility in claiming that his party has “changed … [and] now support gay equality” while Dr Lewis remains in his front bench team. Indeed, in another exchange with a Tory PPC, Sarah Wollaston who is standing in Totnes, Left Foot Forward was told:

“”There is no doubt that the Conservative Party has changed, and that includes its attitude to gay rights.”

Does anyone believe her?

“I found his answer bizarre. He said that for gay people to be allowed to adopt it would have to be proven that civil partnerships work.

“He then said that he voted against the lowering of the age of consent for the same reason that he is opposed to children as young as 16 or 17 being allowed to join the army. He said that just like joining the army puts your life at risk, gay sex can put your life at risk.

“He added he wasn’t homophobic, and that his wife has a gay friend who regularly comes over to their house!

“I asked how he could compare sex between consenting adults to going to war, and said that heterosexual people were as able to get sexually transmitted diseases as homosexuals.

“He then accused me of glossing over the dangers of HIV.

“I was disgusted – I felt he was implying that just being gay puts your life at risk and that somehow gay relationships are inferior and unstable compared to heterosexual marriage.”

Meanwhile, Andrew Tindall, the student and blogger who first alerted Left Foot Forward to Julian Lewis’ remarks, has also posted his own evidence-based blog post on the risk of HIV transmission. It clearly shows that sex between men results in fewer cases of HIV transmission than heterosexual contact.

21 Responses to “Julian Lewis demands “respect for the truth””