The total cost of replacing Trident could reach more than the £100 billion figure quoted by Nick Clegg. 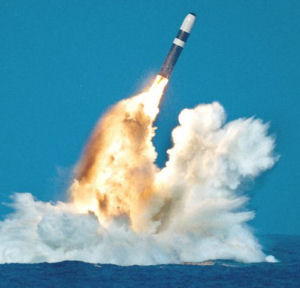 Nick Clegg, and a group of top military brass who have written in The Times today, have thrust Trident replacement right to the top of the political agenda, and the discussion is likely to continue over the next couple of days with a question on the nuclear weapon system highly likely to come up in tomorrow’s TV debate.

“The Trident nuclear deterrent is fast becoming a sort of holy grail in the national debate about how to reduce the deficit.”

Last Thursday Clegg described the cost as coming in at around £100 billion. And now much of the criticism aimed at him seems to be about his cost figures with various numbers getting thrown around.

“The figure of £100 billion cost of Trident over 25 years comes from Greenpeace and CND, hardly the most reliable or impartial sources.”

Oliver Kamm has since followed this up on The Times website, repeating the error, and writing:

“If you believe that nuclear deterrence is a valuable component of British defence, then Trident is the right choice on grounds of cost and because it genuinely is a minimal deterrent.

“It thereby gives us exactly the credibility in Nuclear Non-Proliferation Treaty negotiations that CND and Greenpeace complain that we don’t have.”

The reality is that CND cites the cost of Trident replacement at £76 billion. This figure is reached by simply adding together two government statistics detailed in the government’s 2006 defence White Paper. The first is the £15-20bn government estimate for buying new submarines, new warheads and limited infrastructure; the second is the annual cost for operating a replacement nuclear weapons system.

According to the White Paper, running costs currently take up 5-6 per cent of the defence budget and will continue to do so over the lifetime of any replacement system. Over the estimated 30-year lifetime of the successor system this adds another £50-66bn to the total real life cost (in 2006 prices).

The Greenpeace estimate, based on extensive research, is higher at £97bn. It too is based on government figures, but involves adding in the cost of items directly related to the nuclear weapons system that are not included by government such as the cost of extending the lifetime of our current missiles, the estimated cost of procuring a new generation of missiles, the cost of operating support vessels that are solely dedicated to the deterrent and the effects of defence inflation.

Even the military generals writing in The Times today argue the lifetime cost of the Trident programme will come to more than £80 billion, and it is worth noting that the government’s White Paper costings have been broadly criticised by the National Audit Office, and consequently the MoD are thought to be currently revising these estimates in light of National Audit Office concerns.

Greenpeace’s disarmament campaigner, Louise Edge,  told Left Foot Forward that they did not include a percentage of the costs of upgrading AWE Aldermaston (estimated at £7.5bn between 2005 and 2015 according to government figures) because it was not possible to find data clearly separating investment to maintain current weapons and investment to build new weapons. In fact, with this cost included, the total sum could reach more than Clegg’s £100 billion figure.

39 Responses to “Fact check: How much will Trident replacement cost?”