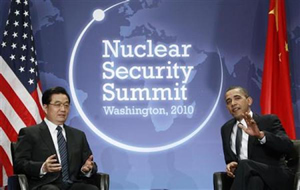 In the week President Hu held talks with President Obama at a summit on nuclear security, David Cameron last night suggested China was a potential nuclear threat – citing uncertainty “of the future in China” as a reason for maintain Trident and comparing China to Iran; see this post on Left Foot Forward for a video of Cameron’s remarks.

Following the summit, the past three days has seen a remarkable joint statement by 40 European leaders ranging from former prime ministers and foreign secretaries to defence chiefs and senior parliamentarians. Published by the Royal United Services Institute’s European Leadership Network, the statement calls for the inclusion of all nuclear weapons, from the tactical to the strategic, to be included in multi-lateral disarmament talks.

The group also hails the establishment of nuclear free zones in Latin America, sub-Saharan Africa and Central Asia and calls for a “credible process for the discussion of a Weapons of Mass Destruction Free Zone in the Middle East”. The leaders’ statement also pressures the US on the Comprehensive Test Ban Treaty as well as calling for its adoption by China, Israel, Pakistan, India and North Korea.

“This statement marks the launch of a European Leadership Network for Multilateral Nuclear Disarmament and Non-Proliferation. Its goal is not only to work with the signatories to promote dialogue on these issues within Europe and between Europe and other parts of the world, but also to help build awareness and expertise on nuclear issues, in a politically non-partisan way, across a whole new generation of European political and parliamentary leaders.“

With the foreign policy and international security prime ministerial debate just one week away, it was encouraging to see cross-party support for a new round of multi-lateral disarmament with signatories from Labour, Conservative and Liberal Democrat statesmen including Lord George Robertson, Sir Malcolm Rifkind and Sir Menzies Campbell.

The British press have understandably focused on the general election campaign, but developments on nuclear weapons security in the last seven days will prove the more lasting.