David Cameron fails to mention "gay or straight" - this despite briefing the line in advance of his speech, and despite it being on the Tory party website. 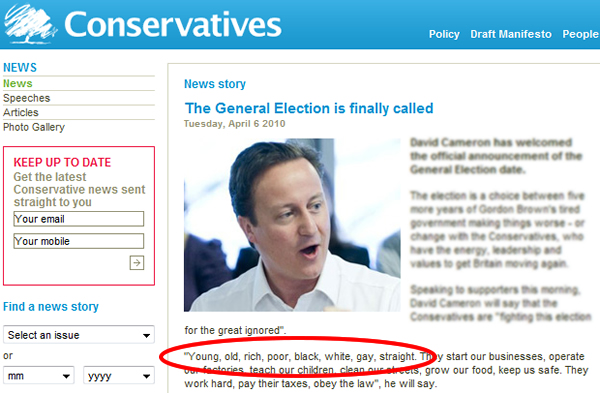 David Cameron, in a speech to activists on the South Bank, claimed the Tories would be fighting the election “for the great ignored”, claiming his party was for “young or old, rich or poor, black or white…” But he neglected to include “gay or straight” despite briefing the line in advance of his speech, and despite it being on the Tory party website:

As Sunder Katwala of the Fabian Society tweeted, it is to be hoped this is just a lapse of memory, and not a message of support to Chris Grayling:

“Cameron dropping ‘straight or gay’ having briefed it surely memory error. But extends No Comment on Grayling & could reanimate it“

The fallout from Mr Grayling’s comments continues to drag on for the Conservatives, with a poll of 1,193 gay voters for the Pink News website showing support for the Tories down five points from 25% to 20%, with Labour unchanged on 28% and the Liberal Democrats up five on 29%.

The poll also revealed 30% of gay voters “felt less favourably” towards David Cameron following his recent Gay Times interview in which he failed to commit to a Lords amendment allowing civil partnership ceremonies to be performed on religious premises.

Meanwhile, Compass has launched a petition calling on Mr Cameron to sack Mr Grayling and “clearly state his party’s stance on discrimination” following the shadow home secretary’s remarks over the weekend in which he was secretly recorded telling a right wing think tank that bed and breakfast owners should be allowed to bar gay couples from their premises.

“Will the man who might be our next Prime Minister sit by and silently accept bigotry from his top Shadow Cabinet members, or will he reassure the people of Britain that he means what he says that his party has changed?

“Allowing certain business-owners to discriminate based on sexual orientation opens the door to discrimination based on race, religion, country of origin, and anything else.

“Sign our urgent petition to David Cameron, telling him to sack Chris Grayling and clearly state his party’s stance on discrimination.”