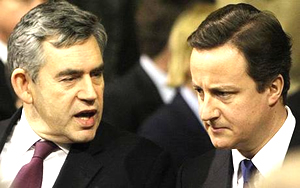 Gordon Brown came second behind Nick Clegg among Facebook users last night. A poll of more than 1,000, carried out immediately after the debate, showed that Nick Clegg scored 39.9 per cent, Gordon Brown 13.9 per cent and David Cameron 12.4 per cent, with 2.6 per cent unsure and 31.2 per cent saying they hadn’t watched it.

“With over 43,000 fans currently following Democracy UK, tonight’s Rate the Debate application experienced a groundswell of users. This volume of participation is a testament to the popularity and appetite for the application and we’ll ensure it is ready for the impact of next week’s debate.“

Paul Waugh has more on the debate on facebook. In terms of twitter, the debate was the most tweeted event around UK politics, seeing more than three times the activity of Nick Griffin’s appearance on Question Time. There were a total of 184,396 tweets from 36,483 tweeters at an average frequency of 29.06 tweets per second and a peak of 41.05 tweets/second.

The sentiment scores – determined by looking at positive, neutral and negative linguistic meaning within tweets – were Clegg 3.631, Cameron 3.033 and Brown 3.006. Clegg was also the most tweeted of the three leaders, followed by Cameron and then Brown.

“Nearing 200,000 tweets and with over 35,000 people tweeting, the first leaders’ debate was the most tweeted event around UK politics, with more than triple the activity than around Nick Griffin’s appearance on Question Time.

In the battle of the parties, Labour had a more dynamic feature on their website with members and supporters alerted to a Debates Dashboard featuring a twitter feed of politicians and bloggers. The site posted the party’s rebuttal lines, with a social media feature which allowed users to tweet and post to facebook. By contrast, the Conservative party website featured a single feed of prominent Conservative tweeters.

Looking at the impact of the debates on campaigning, just before midnight, Helen Symonds from Unions Together sent out an email to 40,000 people. It contained a video (featured on Labour List) of key moments from the debate and said:

“In the debate tonight, Gordon Brown spoke for all of us when he demanded to know what the Tories will do to safeguard the economic recovery and protect jobs. No surprise – Cameron refused to offer any guarantees … Join me and other union members this weekend, as we tell people in our communities the truth about the Tories’ policies.”

The aim, I am told, was to get activists while the debate was fresh in their minds to commit to doing more door-to-door canvassing. Facebook also noted that They used Facebook to post ‘rapid rebuttals’ and ‘for the record’ posts during the debate, attacking claims from the Conservatives and Liberal Democrats and making the Labour case to their Facebook fan base.

The Telegraph covers shifting Google search trends and reports that:

“‘Trident’, the nuclear deterrent Mr Clegg pledged to scrap, and ‘quango’, the unelected bodies that Mr Cameron has set his sights on reducing, were the subjects of the majorityity of significantly increased search traffic, going up by about a quarter and a half respectively.”

Reaction on the blogs mirrored that of the papers and the polls, from those who watched it at least. Alex Smith, editor of Labour List, blogged:

“I thought Nick Clegg was both the net winner and the best performer on the night. He was clear and principled, and as had the advantage of being able – and keen – to attack both his opponents. Gordon Brown was strong throughout, particularly during the middle third, during which David Cameron was at his weakest.

“Some of Gordon’s attack lines were over-prepared and forced – on Ashcroft’s posters for example – and his constant refrain, “I agree with Nick”, as an attempt both to appeal to the Lib Dem leader – and voters – and to show David Cameron as the odd man out, was too calculated and too frequent.

“But this was a strong showing from Brown. I also think he’ll improve throughout the debates, and end out the clear winner in the economic debate in two weeks’ time.”

“That was the phrase used over and over again by David Cameron and Gordon Brown during last night’s first ever general election leader debate on ITV1. In isolation the use of that phrase would have seemed consensual and reflected well on them but the fact that they said it so many times ended up making it clear that Clegg was actually setting the agenda.

“I expect Brown and Cameron didn’t actually realise what they had done in this respect until afterwards.”

And Daniel Hannan, in his Daily Telegraph blog, wrote:

“Nick Clegg won. Everyone said so – the pundits, the punters, the public and, not least, the markets: the pound started sliding the moment the first opinion polls were published. I don’t think I can have been listening to the same debate. I mean this quite literally. I was one of the tiny number of people who heard the exchanges live on Radio 4…

“On the radio, Cleggie was the clear loser. He talked in cliché, and littered his speech with “I think”, “as I say” and the like. Gordon Brown did much better than I had expected, not least because he has somehow conquered his stammering repetitiveness. David Cameron sounded calm and ready.”

14 Responses to “Brown second to Clegg among Facebook voters”