UKIP's East of England MEP Stuart Agnew was secretly recorded by The Sunday Times telling an undercover reporter how to get round the ban on proxy donations. 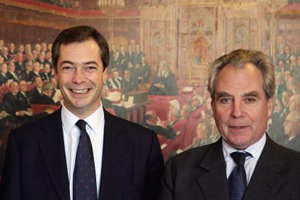 As the election campaign kicks off, UKIP finds itself mired in sleaze allegations, with East of England MEP Stuart Agnew secretly recorded telling an undercover reporter how to get round the ban on proxy donations. The Sunday Times sting also caught out UKIP leader Lord Pearson and former leader Nigel Farage – who is running on an anti-sleaze platform against Speaker John Bercow in the election.

All donations of more than £7,500 to a party headquarters, or £1,500 to an individual or branch, must be declared and real names given to the Electoral Commission, yet Agnew told the undercover reporter, who said her aunt wished to make an anonymous donation:

“I’ve spoken to Nigel Farage and he says at the moment you can put £25,000 into Global Britain and you will remain anonymous… Of course, there is an element of trust though that your aunt wants that money into UKIP… Now, as the thing is run by Malcolm Pearson and as he is the leader of UKIP, there’s a pretty good chance, isn’t there, that that money will go in the right direction…”

The Guardian has since revealed that UKIP received £80,000 last year, via Global Britain, from Patrick Barbour – a Taxpayers’ Alliance backer. Agnew appeared to have no end of methods of concealing donations, adding:

“Another thing she could do: you are her niece — she could give you £3,000 before April 5, in other words before the end of the tax year… as a present, as a gift. You would then immediately give UKIP a donation of £3,000…

Responding to the report, UKIP merely insist it was “not unwise” for Agnew to follow up the lead, claiming it was just “naive” of him “not to realise it was a Sunday Times reporter in disguise”. The party also claims that all donations received for the European Election campaign – including the £80,000 via the Global Britain front group were:

“Perfectly legal and within the guidelines set down by the Electoral Commission.”

UKIP has been plagued by allegations of impropriety recently; Left Foot Forward has reported several of these cases:

• Last November, West Midlands MEP Mike Nattrass threatened to sue The Sunday Times after it reported allegations he was being investigated by OLAF, the European Anti-Fraud Office.

• In addition to Nattrass, current or former MEPs Ashley Mote, Derek Clark, Jeffrey Titford and Farage himself have been investigated by OLAF.

• Also last autumn, another former UKIP MEP, Tom Wise, was sent down after being convicted of embezzling £36,000 of taxpayers’ money into a secret bank account – £3,500 of which was spent on two bottles of wine.

10 Responses to “As election kicks off, UKIP finds itself mired in sleaze”