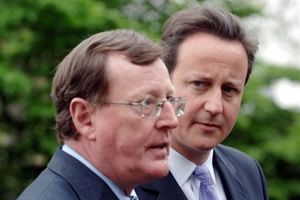 Its been one of those weeks that David Cameron will want to forget. In 2008, Cameron, joined forces with Ulster Unionist leader Sir Reg Empey in announcing that their parties would be forming an alliance, which would see joint candidates standing across Northern Ireland. Cameron hailed their new links as a “dynamic political force”.

This week’s events, however, have raised serious questions not just about the future of this political relationship, but more importantly, about Cameron’s judgement, and his ability, if elected to Number 10, to act as an honest, neutral broker  in Northern Ireland.

“We cannot do is force people to vote a particular way.”

Speaking to the Financial Times, Rick Wilford, the Professor of Politics at Queens University, Belfast, clearly says Cameron’s alliance with the UUP was more of a token gesture of “big tent politics” than a serious effort to gain electoral advantage. Indeed, the UUP’s sole MP, Lady Sylvia Hermon, has recently made clear she will not run as a joint Tory/UUP candidate in protest at what she has consistently seen as a bad alliance.

And now, Cameron faces pressures from senior figures on both sides of his this now uneasy alliance. Commenting on the state of the relationship between the Conservatives and the Ulster Unionists, former UUP deputy leader John Taylor, now Lord Kilclooney, made clear his party’s links were flawed, saying:

“I’ve always thought it to be a mongrel relationship. Either they [the UUP] should have gone the whole way and become a part of the Conservative party or nothing. Not this kind of mongrel relationship which has led tragically to the confusion over the last few weeks, including [on Tuesday].”

Taylor, himself a former home affairs minister when Stormont met as an assembly in the 1970s, went on to sharply criticise his party’s stance on policing and justice, declaring:

“Ulster Unionists have historically always been for the transfer of security and, more so, policing to Northern Ireland. The late Brian Faulkner the prime minister (of Northern Ireland) said that devolution was useless at Stormont unless you had control of the policing and judicial system.”

So what of the reaction from Conservatives? The chairman of the Northern Ireland select committee at Westminster, Tory MP Patrick Cormack, made clear his view that it looked “odd” and “inconsistent” that the Conservatives and UUP were maintaining their electoral pact, despite disagreeing on what, in many respects, is at the heart of Northern Ireland policy.

As the week draws to a close, Cameron has found himself between a rock and a hard place, seeking to be all things to all men, supporting the Hillsborough agreement on the one hand, whilst attempting to strike a more sceptical note to appease his UUP allies on the other.

Serious questions must now be asked over Cameron’s ability to act as a neutral referee if he were to become prime minister, were his services to be called upon during a future Stormont crisis. As Democratic Congressman and chair of the US Friends of Ireland group Richie Neal has said:

“My experience tells me that to be an honest broker you have to be precisely that.”

In aligning himself with the UUP so closely, Cameron is now no longer an honest broker, but a participant in Northern Ireland, with political interests to consider, alongside the national interest. And what of Cameron’s election chances? Judging by recent polling data, it is distinctly possible that his new alliance might not return any MPs to Westminster after the election. In such a situation, what authority would he carry in Northern Ireland when the voters have rejected his polices and ideas?

Writing in Progress, Conor McGinn, chair of the Labour Party Irish Society, dubbed the alliance “an albatross around Cameron’s neck”; it remains to be seen whether the albatross fast becomes a noose around the Tory leader’s policies on Northern Ireland.