On Friday, the UUP announced that it could not support the proposals as they stood, although a meeting of its executive this evening will take a final decision. 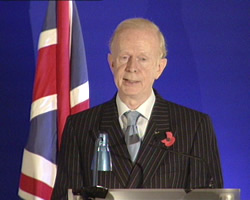 News that Hillary Clinton has spoken to both Ulster Unionist Party leader, Sir Reg Empey, and Sinn Fein deputy first minister Martin McGuinness, has highlighted the intense work to shore up support for a Tuesday’s Stormont vote on the devolution of policing and justice powers.

The US Secretary of State’s intervention was particularly aimed at securing support from the Ulster Unionists.

On Friday, the UUP announced that it could not support the proposals as they stood, although a meeting of its executive this evening will take a final decision on the matter.

In a statement, the UUP published a list of demands that would have to be met for them to give support for the devolution of policing and justice powers, namely:

• Improving the way the executive works, described by the Ulster Unionists as being “dysfunctional”;

• A resolution to the thorny issues of regulating parades across Northern Ireland.

“It remains our view that the current Executive must be capable of exercising its existing powers before such an important issue as policing and justice is devolved.”

The UUP’s position emerged after DUP deputy leader Nigel Dodds, during an interview with Radio Ulster’s Inside Politics programme, said that if the UUP failed to support the devolution of policing and justice, a “serious situation” would arise that could put a halt to the whole process.

“I believe that the people of Northern Ireland are tired of political point-scoring and party positioning. They deserve to see devolution working better.”

“The UUP have three days to sort themselves out. They can do the right thing and join with the rest of us in building a new and better future or they can continue to pursue a negative, rejectionist agenda which is out of step with the majority of unionist opinion the vast majority of citizens on the island.”

Unsurprisingly, the UUP reacted angrily to such statements, with Sir Reg making clear “the UUP will not be blackmailed or bullied by anybody over our attitude” to the devolution of policing and justice.

The UUP’s stance is likely to cause headaches for David Cameron.

In 2008, Cameron described as a “dynamic political force”, a new alliance between his party and the UPP, with joint candidates to be fielded at the General Election.

As a result of the UUP’s opposition to the devolution of policing and justice at the present time, says Ireland Online:

“David Cameron is a supporter of the Hillsborough deal and he now faces the prospect of going to the polls aligned to a party which opposes it.”

Cameron’s troubles are only compounded by the news in January, in a posting by Nick Watt for the Guardian’s politics blog, that some senior Tories were somewhat uncomfortable at how close their party had become to the UUP.