The Sun today reports that council tax "has doubled under Labour" - But 30 of the 50 councils with the highest rate of council tax increases are run by Tories. 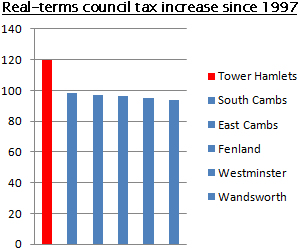 The Suns today reports that council tax “has doubled under Labour” – but 30 of the 50 councils with the highest rate of council tax increases are run by the Tories, with a further seven Conservative-led coalitions.

“Council tax has doubled under Labour – and the average bill in England is set to soar by another £25. Families will have to find £1,439 a year for an average Band D home – costing a record £120 a month.”

The story does not, however, mention that the council tax increases result from decisions taken locally, not in Whitehall. Indeed, central government funding has risen 45 per cent in real terms since 1997. By contrast, funding fell 7 per cent under the last time the Conservatives were in power – another fact overlooked by the Sun.

Five of the top six councils with the highest real term increase in council tax in the past 13 years are all Conservative run: South Cambridgeshire (98%), East Cambridgeshire (97%), Fenland (96%), Westminster (95%) and Wandsworth (94%). The council with the highest increase is, however, Labour-run Tower Hamlets in east London, which has had a 120% real term increase.

But overall, just six of the top 50 councils are Labour run or Labour led – the same as for the Lib Dems – with one led by none of the main parties.

The Sun’s shoddy journalism is compounded  by the fact that the quotes attributed to Ms Spelman are identical, word-for-word, to those used by her in November. Her line that “Council tax is Gordon Brown’s most painful stealth tax”, followed by the claim “you pay more and get less under Labour” is a direct lift from a Tory press release dated 5 November 2009, reported in the following day’s Express.