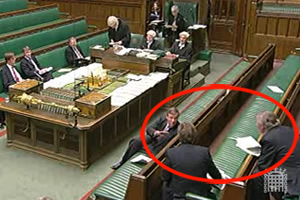 On Friday, David Cameron’s MPs ruined the chances of a Private Member’s Bill on debt relief banning “vulture funds” passing. The three Conservative MPs, Christopher Chope, Andrew Robathan and Simon Burns – two of them Tory front benchers – then refused to admit which one had objected to the Bill.

Left Foot Forward is joining the Jubilee Debt Campaign in calling on Mr Cameron to come clean on whether this important Bill was stopped on his instructions. The Debt Relief (Developing Countries) Bill aimed to stop secretive off-shore investment funds from profiteering out of third world debt.

These “vulture funds” buy up the debts of poor countries, often at a fraction of their face value, and pursue them through the international courts, in many instances despite agreements by the UK and others to give the country debt relief. In one such case last year, Liberia lost a £13m case in London against two vulture funds – meaning that debt relief provided by UK taxpayers amongst others was taken away from reducing poverty into the pocket of tax havens.

If the Bill had passed, it would have help tackle this problem by protecting the existing debts of the 40 Heavily Indebted Poor Countries (HIPCs) which are eligible for relief under the internationally-agreed HIPC initiative. It would have prevented creditors holding these debts from recovering in excess of the rate of relief expected from all creditors under the initiative, and provided an incentive for debtors to co-operate in settling these debts on terms consistent with the Initiative.

The Tories had raised objections to the Bill from the start, in stark contrast to its unequivocal backing by Labour and the Liberal Democrats. On 27 February the Jubilee Debt Campaign reported that Conservative Treasury spokesman David Gauke had admitted to “outstanding concerns” and said his party “would not support the measure being rushed through the House”.

Tory politicians appeared to be prepared to make people in developing countries pay for the past actions of corrupt leaders. Christopher Chope MP argued in the debate on this bill that:

“For such countries that are essentially corrupt, we seem, in effect, to be saying that we should indulge that corruption by writing off these debts, even when they have been incurred as a result of commercial transactions.”

MEP Roger Helmer, meanwhile, was busy arguing that “debt relief can do more harm than good” on Conservative Home, claiming that, as a result of the Bill:

“British taxpayers will pick up the costs for the developing world’s continued reliance on aid.”

He obviously prefers that British taxpayers money be siphoned off instead by investment funds in the Caribbean. Then, just a day before it was being tabled, Philip Davies, Conservative MP for Shipley, tried to introduce an amendment to the Bill which would have prevented the bill reaching its third reading.

After it was pointed out that his objection (that the Bill should not apply to past judgements) had been agreed at committee stage, his objection was withdrawn. With Baroness Quinn agreeing to take it through the Houses of Lords, it seemed as if the Bill was set to pass before the general election.

At the very last minute on Friday, however, three Tory MPs were seen to huddle together on the benches before one shouted the word “object!” – which, under parliamentary procedure, effectively stopped the bill passing.

As The Guardian reported this morning, debt campaigners have reacted in fury and disbelief to the killing of the Bill. Sally Keeble MP accused the Conservatives of “duplicity” by pretending to back the legislation and then sabotaging it at the last minute:

“This action today gives the lie to the Tories’ pretence of supporting international development. This bill was a small, but significant step in helping the most impoverished countries deal with their debts. It also protected British taxpayers’ money.

David Cameron has important questions to answer. He must own up if one of his team was responsible for scuppering this bill. Was it his deputy chief whip Andrew Robotham MP, the whip Simon Burns MP, or the chair of the bill committee, Christopher Chope? Was the bill stopped on his instructions? Will the Conservatives commit to re-introduce this bill within 12 months of the new Parliament if Mr Cameron forms a government?

International development secretary, Douglas Alexander, has sent a letter to the Tory leader demanding an explanation, which you can sign at http://www.globalpovertypromise.com/letter

You can also join the Jubilee Debt Campaign’s call to Harriet Harman and Alistair Darling to make extra time for the Bill and to guarantee to re-introduce the legislation if their party wins the General Election.