David Cameron attacked "vested interests" at the weekend. But his own front bench has received close to £200,000 from the financial services sector. 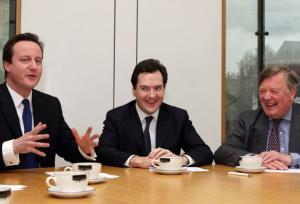 As David Cameron faced questions today about why he had not removed the whip from lobbying sinner Sir John Butterfill, Left Foot Forward examines the hypocrisy behind Cameron’s “vested interests” speech at the weekend.

On Saturday David Cameron declared that only a Tory Government could stand up to elite interests such as the City. With echoes of Obama’s “we are the change we seek” speech, Mr Cameron stated that he would take on the vested interests which were the “enemies of change” and who would “use any means to block progress” to maintain their power. But when he says by “any means” does this include financing the Tory frontbench, including himself?

The register of members interests shows a clear pattern of the Tories taking money from wealthy men who have made their fortune in the City. Across the Tory front bench close to £200,000 has been accepted from financial firms:

• George Osborne’s office has received £25,000 from financier Simon Robertson, £15,000 in support from the head of the CQS Management Ltd hedge fund Michael Hintze, further support from Hugh Sloane (of the Sloane Robinson hedge fund), as well as gifts in kind from IGPL.

• Liam Fox received £50,000 from the managing partner of Alchemy Partners, a private equity firm, £10,000 from Stanley Fink, £5,000 from Private Capital Limited, £5,000 from Tweeddale Advisers (registered with the FSA) and £4,500 from head hedge fund manager Alan Howard;

• Oliver Letwin has been paid over £30,000 from N.M. Rothschild & Sons as a non-executive director;

• Francis Maude received £40,831 from private equity advisers Bain and Company Holdings for a temporary secondment, was paid £9,000 for 15 hours work as a member of Barclays’ Asia-Pacific Advisory Committee, and received a gift worth £700 from Flowidea Ltd, an investment company.

• Teresa May has received gifts worth £1,200 from Michael Hintze;

• Mark Hoban has received hospitality from JP Morgan Chase worth £1,300; and

• David Cameron has received gifts in kind from IGPL a company which describes itself as a “private holding company which invests in world class financial services businesses” while Stanley Fink – the former Director and now Chairman of the Man Investments hedge fund and co-Treasurer of the Conservative party, has paid for Cameron’s travel costs.

It is unclear how Mr Cameron can claim to be an agent of “change” when these donations outline quite how clearly the Conservatives are supported by the same vested financial interests which caused the recession in the first place.

• Join 38 Degrees’ call for David Cameron to support lobbying transparency, a position now adopted by both Labour and the Liberal Democrats

I’ve been reminded of one other Conservative vested interest: the Telegraph expose that Andrew Lansley is “bankrolled by private healthcare provider”