Chris Rapley has lamented the "political ineptitude of scientists". But he says they face asymmetries in public debates on climate change. 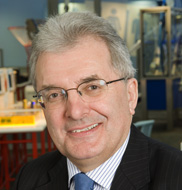 The Director of the Science Museum, Chris Rapley, says that scientists engaging in public debate on climate change face a series of asymmetries including seeing the rules of scientific discourse rubbing up against political “mud wrestling”. Speaking in a detailed discussion on ‘climate change science and its sceptics’ in central London, Professor Rapley went on to describe the “political ineptitude of scientists”.

The debate, hosted by Policy Network, examined growing public scepticism over whether climate change is manmade and what should be done by the scientific community in response. Mr Rapley questioned the title of the debate and outlined his disquiet with “the appropriation of scepticism by those who oppose the science.”

Professor Chris Rapley, a former Director of the British Antarctic Survey, said he was concerned by the dwindling number of experts who can talk “authoritatively about the big picture” suggesting that the number of ‘T-shaped people‘ with both broad and deep knowledge on climate change was overwhelmed by “people willing to prognosticate”. He quipped that he would not mention Melanie Phillips, who has been criticised for her outbursts on climate change.

“You painted a picture that is slightly one side of the honest scientist on the one side and the polemic campaigner on the other. The other part of the debate is that there are honest and eminent scientists on the other side who have been silenced for 10 to 15 years. That is part of the perception that part of the scientific community has been excommunicated. Unless there is a new dialogue, there will be this problem.”

“It’s always healthy to have that open debate but it can be bedevilled by passions outrunning logic … I have not been convinced by your eminent scientists … some of whom are very flaky.

“There is a tyranny at work here. My impression is that where scientists know there are big uncertainties, they are afraid to emphasise them because people will misunderstand them. The evidence is that when they confess to them, they are exploited.”

Anthony Giddens, Professor Emeritus at the LSE and author of ‘The Politics of Climate Change‘ said:

“How do we regain that word scepticism? There is an overlap between climate sceptics and Eurosceptics who tend to see a conspiracy.”

“The thing that struck me most was that there was a real consensus in the room (amongst those who accepted the scientific consensus view that fossil fuel polluting is driving global warming) that it would be helpful to reframe the argument to one about risk and probability and away from the view that the science is all settled.

“Since we know that the vast majority of scientists – literally thousands of humanity’s greatest minds – are of the view that there is a staggering chance, of 90 per cent, that climate change is caused by fossil fuel burning, and since we know that would increase the sum total of human suffering and drive millions of plant and animal species to extinction, its not an unreasonable expectation that, put like that, most reasonable people will want to take out an insurance plan – in other words for there to be a reduction in the amount of carbon dioxide we emit.”