Labour’s record on education received a ringing endorsement last night at a pre-election debate, with opposition parties and the public praising its record. 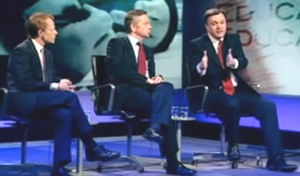 Labour’s record on education received a resounding endorsement last night at a central London pre-election debate, at which the three main parties’ education spokesmen defended their policies on schools. The event, organised by the Times Educational Supplement, saw the majority of the audience vote in favour of the motion:

“Contrary to headlines in the popular press, teachers and schools have never been better”

The audience also believed that Labour were the best party to run schools in the future.

Liberal Democrat education spokesman David Laws, who last month hailed the “astonishing, dramatic, unbelievable” improvement in schools under Labour, said that the claims in the Tory manifesto that standards in schools were falling were incorrect, and education secretary Ed Balls cited improved GCSE grades and the biggest building regeneration programme of schools since the Victorian era amongst other Labour achievements.

Shadow education secretary Michael Gove also praised the government, in particular its Teach First scheme, a system that had created the best ever generation of teachers, but asked why Britain’s schools were still falling behind those of other countries. He argued that we should not be comparing the achievements today with past standards, but rather with the “best and the rest” of schools abroad.

Having been presented with failings of the Swedish system in recent weeks, Mr Gove tried to steer the debate towards America and its Knowledge Is Power KIPP charter schools, which he argued helped combat social deprivation and gave teachers a greater degree of autonomy.

Mr Laws, meanwhile, proposed an education freedom act, that would devolve power to schools and colleges, stripping away the DCFS’s power to micro-manage education. The Lib Dems want to abolish league tables and teaching to tests, and say school standards should be judged through a system of “intelligent accountability” with an independent standards authority. There were no further details on how this body would operate.

Mr Balls admitted that league tables failed to show how schools were improving standards, and touted his report card scheme, information for parents on how well the school is helping those pupils who fall behind to catch up and stretching the most able. When challenged to find an alternative, Mr Gove came up with “a points system” that would measure how much the school had “stretched” its students. However, the details of these ideas remained vague.

However, it was the Tories’ policies, rather than Labour’s education record, that received the most vociferous attack from both Laws and the audience. Mr Laws said the Tory plans were “dotty” and “gimmicks to announce at party conference“, while Mr Balls expressed exasperation at Mr Gove’s “silly debating games” in reference to his evasive, Oxford Union-style techniques.

Mr Gove’s prohibition on teaching for graduates with third class degrees or lower – dubbed “The Carol Vorderman Problem” by David Laws – again came under fire, as did his plans to allow free schools to ditch the National Curriculum. Mr Laws said it was “bizarre” to allow “a tiny minority” of schools freedom while the majority of schools in the maintained system would be subject to an even stricter curriculum under the Tories.

The Liberal Democrats and Labour have already announced different measures for funding a “pupil premium” scheme, but last night, Gove still had no answers on how he Tories would pay for this without making cuts to school budgets. He also ducked questions on why the Tories are the only party not allowed to increase education spending when Labour are proposing to increase budgets for the next three years and the Lib Dems have pledged to “prioritise education spend above all other areas”.

“It makes me despair that cutting inheritance tax is a bigger priority for the Tories than the schools’ budget.”

Mr Balls said it was “scandalous” that the Tories planned to expose schools to free market mechanisms:

“If you only rely on the market, you must watch month by month until the school goes to the wall. Meanwhile, it’s the poorer students who loose form this market approach.”

He added that this “unfair and expensive” system would lead to rising social inequality and pit head teachers against each other in a competitive relationship:

“The schools-supporting-schools approach of the last ten years will receive a huge set-back.”

14 Responses to ““Resounding endorsement” of Labour’s record on education”