A report by the Citizens Advice Bureau, which is endorsed by several high profile disability charities, has revealed even more evidence the tests don't work. 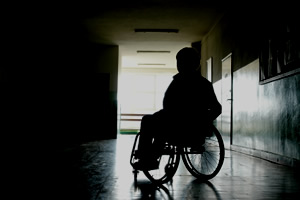 Employment Support Allowance (ESA) was introduced in October 2008 to replace Incapacity Benefit (IB) for new claimants. It aims to help disabled people who might be able to work with support. At first, ESA was greeted with excitement by many disabled people, who were informed that the test would focus on what they can do, rather than what they cannot.

However, since the introduction of the ESA, many disabled people have found out the hard way that the test is not working. Now a report by the Citizens Advice Bureau, which is endorsed by several high profile disability charities, has revealed even more evidence for this.

CAB ran workshops in London and Yorkshire for advisers and welfare rights workers dealing with clients claiming ESA. Many of the advisers shared anonymous details of their cases at these workshops. The evidence gathered suggests that severely disabled people who should be eligible for ESA are being found not to be eligible during work capability assessments, which all applicants must carry out.

According to the report, government figures show that the number of people being found eligible for the benefit under the assessment process as currently operating is 20 per cent fewer than expected. The latest available figures, for January 2010, show that 69 per cent of people assessed for ESA were found fit to work.

The report identifies three key factors which contribute to some of the unexpected outcomes in the assessment process – firstly that certain exemptions applicable to IB are not included in ESA; secondly, that changes have occurred in the process for collecting information; and thirdly, the assessment is not flexible enough to respond to short-term special circumstances.

Based on evidence gathered from case studies, the report recommends that some disabled people should be exempt from the Work Capability Assessment, and that instead decision makers should be allowed to decide on the level of support these people will receive based on written evidence.

The report found several problems with the WCA. Firstly, the test takes little account of variability in symptoms. Secondly, it does not consider generalised pain and exhaustion, which affects a person’s overall ability to work rather than simply affecting their ability to perform selected functions. Finally, it considers the medical rather than the social model of disability- seeing the disability, rather than society’s attitudes to disability, as the problem preventing disabled people from working.

The report recommends that a second level, based on the social model of disability, should be added to the WCA for people who do not automatically qualify for the ESA.

This report will now be welcomed by many disabled people, who have been saying for too long that the WCA urgently needs to be reformed. It is to be hoped that this report is read and understood, and that its recommendations are acted on, by all relevant government officials and decision makers as soon as possible.

It is also to be hoped that government officials will consider the harmful effects that sending disabled people who are not fit for work into work will have on our already badly damaged economy.