David Cameron's attempts to detoxify the Tories took another step backwards this week when one his leading MEPs launched a full on defence of Michal Kaminski. 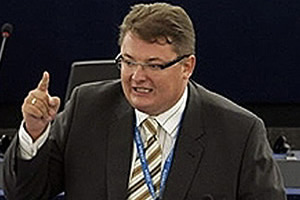 David Cameron’s attempts to detoxify the Tories took another step backwards this week when one his leading MEPs not only stood by his remarks about “climate hysteria” and the “Great Carbon Myth” but launched a full on defence of his friend Michal Kaminski, attacking former Tory MEP Edward McMillan Scott for speaking out against the extremist.

“Michal Tomasz Kaminski? Anti-Semitic? … Linked to far-right organisations? No. Kaminski is proud to recall that during the Second World War, his two grandfathers were fighting the Nazis.

“At the same time, in England, Edward McMillan Scott’s grandparents were interned as a potential security risk. They were prominent members of the British Union of Fascists.”

For the record, here are the facts about Kaminski, leader of the European Conservatives and Reformists group of which David Cameron’s MEPs are members:

• From 1989-1991 Kaminski was a member of the neo-fascist organisation National Revival of Poland (NOP). This movement is anti-Semitic, homophobic and xenophobic. NOP’s manifesto states that “Jews will be removed from Poland, and their possessions will be confiscated” – a statement taken directly from Hitler’s Mein Kampf. The official greeting is the Nazi salute. NOP is part of Roberto Fiore’s European National Front. The NOP poster states “Fascism?!? We’re worse!!!”

Kaminski claims that he was in NOP ‘as a schoolboy’ before the fall of communism in 1989, but an NOP spokesman told the Daily Telegraph he was in it from 17 – 20 years of age, his formative political years: “He was in the party from about 1989 to 1991” said Marek Wojciechowski . McMillan-Scott has confirmed this statement.

• In 1993 Kaminski was the spokesman of the right-wing Catholic Electoral Committee “Fatherland”. He handed out pamphlets at Warsaw’s main train station denouncing immigrants from the east bringing “typhus, malaria and other diseases” to Poland.

• In 1999 Kaminski travelled to London with other Polish right-wingers to visit General Augusto Pinochet, the Chilean dictator who was being detained in the British capital. “This was the most important meeting of my whole life,” he told the BBC at the time.

• In 2000 Kaminski gave a TV interview in which he refers to homosexuals as “pedaly”, literally pedals which is the near equivalent of “faggots” but also implies paedophilia. When the interviewer said it was an offensive term he repeats it: ‘What should I say – they are pedaly’

• In July 2000, Kaminski caused a scandal after his public declaration of support for the infamous pre-war slogan “Poland for Poles,” which was traditionally directed against Jews and invokes memories of the anti-Semitic violence of the 1920’s and 1930’s in Poland. “I want us to have the courage to say, ‘We want Poland for the Poles'”.

• In 2001 Kaminski organised opposition to a national apology by then Polish president Aleksander Kwasniewski for the infamous Jedwabne massacre in 1941 in which several hundred Polish Jews were herded by their neighbours into a barn and burnt to death. Footage of a television news bulletin from 5 March 2001 shows Kaminski, then Jedwabne’s MP, reacting to news about the apology: “I think that Mr President can apologise but for other things. He should withhold apologies for Jedwabne.” Kaminski then gave an interview to the right-wing journal Nasza Polska in which he said:

“Maybe it is an attempt to quieten the consciences of those Jews who did terrible harm to Poland during the Soviet occupation?”

• Also in 2001 Kaminski created a new political formation known as the Right Alliance, which merged with the Kaczyński brothers’ Law and Justice Party (PiS). Before the 2009 European Elections, the PiS absorbed two ultra-extreme groups, the Self-Defence League and the League of Polish Families, one of whose MPs, Ryszard Bender has said “Auschwitz was not a death camp, it was a labour camp,” [nearly one million Jews perished at Auschwitz]

• In 2009 Kaminski denies wearing the Chrobry Sword, the symbol of the NOP and originally the emblem of the pre-war extreme right wing National Democracy. In 2000 Kaminski said:

“I’m not ashamed of National Democracy. It’s my tradition. In my lapel I wear the Chrobry Sword … I feel myself a Pole and a Catholic, and I’m proud of that.”

There is more on Kaminski and Tory extremism in Europe here, here and here and on Left Foot Forward here.