DECC have announced that ‘Horizon Nuclear Power’ have said they plan to have their first nuclear plant generating by 2020. But there are a number of problems. 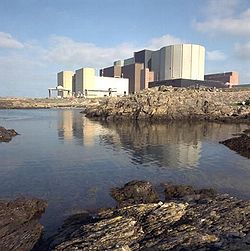 The Department of Energy and Climate Change (DECC) announced on twitter this morning that ‘Horizon Nuclear Power’ have said they plan to have their first nuclear plant generating by 2020, apparently in the former Druid hotspot of Anglesey.

The BBC reports the E.On / RWE joint venture will be spending £7.5 billion building a new reactor at Wylfa. But there are a number of reasons why all may not be as it seems in fair Ynys Môn, and that the wheels could come crashing off the nuclear bandwagon and over the Menai Straits.

The government and industry are desperate to show that atomic progress is being made in the UK. Understandably in such a regulatory and policy minefield, investors need clarification and certainty over project roll out to inspire the sort of confidence they need to take a punt on the already shaky economics of nukes. Yet the official timelines for UK new build have slipped repeatedly, and don’t look like stopping.

• It’s not clear if and when Wylfa would be given the green light, let alone when work could start on site. The complications arise from the deal the government struck with EdF when the company bought British Energy. It has been reported that EdF still holds land vital to the new Wylfa project. It appears EdF doesn’t have to sell the land it owns at Wylfa until it is granted planning permission for two new reactors at both Hinkley Point and Sizewell. There’s no guarantee this will ever happen, so no-one should be holding their breath waiting for an atomic revolution in Anglesey.

• According to the latest list of Infrastructure Planning Commission (IPC) projects Wylfa was slated to get an application in for November 2011. Yet according to Horizon today, an application for Wylfa is only “scheduled for “2012,” a year behind their original schedule.

• DECC said in 2008 that Regulatory Justification, a legal requirement, would be completed in mid-2009. They now say this won’t be happen until after the General Election.

• Similarly, the National Policy Statements should have been designated before 2010. Now DECC can’t say when this will happen.

• Waste and decommissioning was pencilled in to be signed off in the final quarter of 2009. If or when this particular nuclear nightmare will be straightened out is anyone’s guess.

• Again in 2008, then-Secretary of State at BERR John Hutton said, “We consider that a decision by an operator to proceed in principle with building a new nuclear power station and therefore to request from the Government a fixed unit price for waste disposal in a Geological Disposal Facility could come as early as mid 2009” . The Fixed Unit Price is the government’s clever idea to protect taxpayers from hikes in the cost of new build waste management, and it is absolutely central to making the sums for new nuclear even remotely workable. Hutton hoped that in 2009 operators would be given a set price that they must put aside to cover the estimated costs of dealing with waste at the end of the reactor’s life. Well, we’re in 2010 and DECC have only just launched a consultation on the Fixed Unit Price. This won’t finish until the summer, so an operator like Horizon won’t be able to get a figure until into 2011. This effectively translates as DECC creating a delay of 2 years in the space of 2 years. So much for facilitating a nuclear renaissance.

Interestingly, this announcement also shows that someone writing press releases at DECC needs to spend a bit more time checking their workings because they’re making the poor Energy Minister look a little daft. One press release recently wrote of Lord Hunt visiting “Sellafield nuclear power station” even though the Calder Hall reactor at Sellafield shut in 2003. Today Lord Hunt seems to have got muddled up over the number of jobs a new reactor at Wylfa might produce.

Alan Raymant, Chief Operating Officer at Horizon Nuclear Power, a man who ought to know, said that “Each development would deliver up to 800 direct permanent jobs and around 5,000 during the construction period”. Yet a few minutes later Lord Hunt was quoted by the Press Association saying that “with each potential new nuclear plant providing up to 9,000 jobs, the move to low carbon not only helps our climate, but the economy too”. The figure, also reported on the BBC, is nearly twice what Horizon is using.

Perhaps we shouldn’t be surprised about this sort of thing from a department that recently published a Nuclear National Policy Statement (NPS) with 39 references to the word “employment” and a Renewables NPS with no references to employment at all.

Flippancy aside, hats off to the nuclear industry. They are very good at making it sound like they’re going places fast. But despite all the hot air, there’s really more chance of Gaius Suetonius Paulinus turning up at Anglesey again with his XIV Legion Gemina than Wylfa getting three new reactors any time soon.