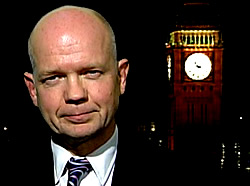 The discussion was held as part of a major Chatham House project, ‘Rethinking the UK’s International Ambitions and Choices’.

Speaking on David Cameron and his shadow foreign secretary’s decision to take Conservative MEPs out of the mainstream centre-right grouping in the European Parliament, the three clashed on Hague’s contention that it is fanciful to suggest that you cannot work with other nations in Europe “as long as you set out in the right way and have the right agenda”, and that “the niceties of European political parties and alliances are a minor consideration by comparison”.

Furthermore, Miliband recalled that European foreign ministers at the monthly Foreign Affairs Council meetings have told him that they see the Conservative move as a “symbol” of how “profoundly wrong” Hague “sees British influence being exercised, not just in Europe, but around the world”.

Pointing out that the Chinese are incredibly impressed by the development of the single market because they look at economic aspects very importantly, he declared that:

“The fact that one of the main British parties isn’t able to influence really directly, hands-on … European legislation on the single market and its relations in trade policy with the rest of the world … does a disservice.”

Nor, Davey reminded us, is Conservative policy welcome in the US. In fact the Obama administration has consistently encouraged the Conservatives in the direction of Europe, finding it strangely out of tune with the President’s rectification of the unilateralism of the Bush years.

However it was Miliband who made the strongest case for Britain’s active involvement in the EU and the differences between the parties, arguing that:

“If we want to avoid a G2 world, then you need to build up European foreign policy strength because we’re not going to have a G2 plus Britain…

“We should at least be honest that there is a profound difference on this European issue. It is a consistent position that William and his party has held but I think it’s a profoundly damaging one.”