The climate change adverts banned today do not go far enough in their warnings of the dangers of inaction, the Green party leader has told Left Foot Forward. 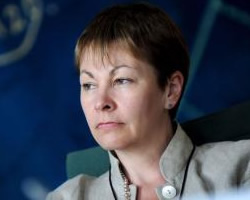 The climate change adverts banned today do not go far enough in their warnings of the dangers of inaction, the Green party leader has told Left Foot Forward. Caroline Lucas, MEP for South East England, described as “frustrating” the decision of the Advertising Standards Authority to ban the two nursery adverts, based on the children’s poems Jack and Jill and Rub-A-Dub-Dub.

Responding to a question from Left Foot Forward at this morning’s Demos event on “Progressive Politics: What future in the UK?”, Ms Lucas said:

“The fact that these nursery rhymes have been banned is incredibly frustrating; if anything, they don’t go far enough, it could actually be Hell – a lot worse than that painted by the IPCC, who have been criticised for understating the risk. It seems incredibly dangerous.”

On the wider point of a lack of belief among the public, a result of the recent “climate gate” emails story – allied to scaremongering and scepticism in the right-wing press – she added:

“What is needed is not just for the dangers to be highlighted but for a positive vision for the future to be presented, for us to say that ‘even if you don’t believe in climate change the measures you take will make your life better, will make your community better and in the long run will save you money’.

“We seem to be less willing to spell out the benefits than dangers, like the jobs created by a green new deal. Green energy generation is more labour-intensive than fossil fuel production, so the more green we are, the more jobs we’ll have.”