Nick Clegg's planned policy of "tax cuts for people and families on low and middle incomes" would be deeply regressive according to a new report. 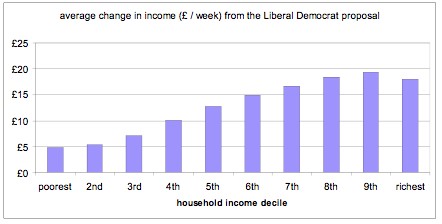 Nick Clegg’s planned policy of “tax cuts for people and families on low and middle incomes” would be deeply regressive according to a detailed analysis by Tim Horton and Howard Reed for Left Foot Forward.

In December, the Liberal Democrats set out a policy to “raise the threshold at which people start paying income tax from current levels to £10,000”. They have made this policy one of four central “tests” for cooperation with a minority government in the event of a hung parliament and Nick Clegg has said:

“This will be a huge change to our society, to make the tax system fair. Offering real help – and hope – to millions of low income families. A vital step towards delivering real social justice for all.”

But a detailed report, ‘Think again, Nick! Why spending £17 billion to raise tax thresholds would not help the poorest’ (pdf) by Tim Horton and Howard Reed for Left Foot Forward shows that:

• the measure would do nothing to help the very poorest, who don’t have income large enough to pay tax;

• only around £1 billion of the £17 billion cost (6 per cent) actually goes toward the stated aim of lifting low-income households out of tax;

• households in the second richest decile would gain on average four times the amount than those in the poorest decile; and

• the policy would increase socially damaging inequalities between the bottom and middle.

Horton and Reed conclude that:

“Spending £17 billion on increasing the personal allowance is a very poor way to help those on low incomes. It could actually harm the welfare of low-income households by increasing inequality and relative poverty.”

While debates about tax and spend will no doubt be animated at the Lib Dems’ conference in Birmingham, Left Foot Forward hopes that this factual analysis will assist the discussion.