A new report released last night by the US-based Pew Environment Group shows that China has now overtaken the US as the biggest global investor in clean energy. 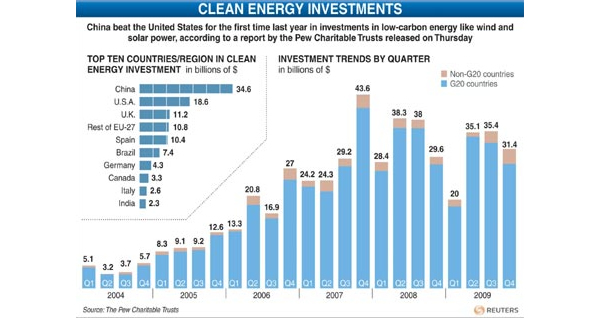 A new report released last night by the US-based Pew Environment Group shows that China has now overtaken the US as the biggest global investor in clean energy. In 2009, China invested $34.6 billion in the clean energy economy while the United States invested $18.6 billion and came in second place.

The New York Times reports that China aims to spend 34 percent of its $586 billion stimulus package on green projects.

In other clean energy news, renewables supplied more than 60 per cent of Spanish power demand in the first week of this month, setting a new global record.