A petition has been launched asking the Queen "to strip Stephen Byers of his Privy Council Membership", calling his behaviour "wholly & utterly inappropriate". 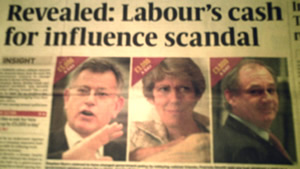 In the wake of the revelations about the conduct of former minsters Stephen Byers, Geoff Hoon and Patricia Hewitt yesterday there have been demands for Byers, especially, to be severely punished for boasting he was “like a cab for hire”, charging up to £5,000 a day for his services and claiming he had used his government contacts to change policies in favour of businesses which had given him money.

Although Lord Adonis, a successor of Byers as transport secretary and one of those named as having been influenced, denies Byers’s version of events, telling the Commons this afternoon that he “does not know why he would say such a thing”, pressure is mounting for Byers to be expelled from the Privy Council.

A petition has been launched asking the Queen “to strip Stephen Byers of his Privy Council Membership”, stating his continued membership of the council is “wholly and utterly inappropriate”. It adds:

“We, the undersigned, call on Her Majesty Queen Elizabeth … to strip Stephen Byers MP of his membership of the Privy Council due to his involvement in offering to sell access to the British Government for personal profit.”

Just last weekend Left Foot Forward reported the launch of the Alliance for Lobbying Transparency‘s campaign for a compulsory register of lobbyists, revealing the high number of PPCs involved in the lobbying industry and their failure to disclose their links to voters.

“We must now have public scrutiny of the whole of the influence industry. The public has a right to know what other deals are being done over public policy and government contracts. Gordon Brown, David Cameron and Nick Clegg must publicly commit to introducing a statutory register of lobbyists, as recommended a year ago by the Public Administration Select Committee…

“Today’s revelations have finally embarrassed Labour into supporting a statutory register of lobbyists in its manifesto. This is not enough. We need a firm commitment from all parties to implement the Committee’s recommendation for a statutory register of lobbyists at the earliest possible date. Despite David Cameron’s recent words on the need for more transparency in lobbying, the Conservative party still appears to back the failed system of self-regulation by lobbyists over a compulsory register…

“For too long we’ve been asked to trust politicians that they will act in the public interest. If public trust is to be rebuilt – and if we want government accountability – we need transparency. The public must be allowed to scrutinise in whose interest politicians are acting, ours or those of business.”

• Sign the 38 Degrees petition demanding lobbying transparency, and find out what you can do to take action.

“Dispatches: Politicians for Hire” is on tonight on Channel 4 at 8:00.