A systematic campaign by neo-fascist climate-denying BNP supporters seems to have achieved just what it wanted; the BNP campaigned against these ads and won. 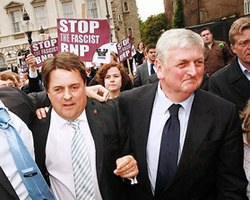 Further to Left Foot Forward’s story here about the decision of the Advertising Standards Authority to ban two climate change ads, it is important for us all to be clear just why the ASA caved in to pressure and made this bizarre decision to ban the excellent “nursery rhyme” adverts on man-made climate change

So, look at this link, not widely picked up last week; here are some of the things said at this notable location:

“This development comes just six weeks after the BNP’s “Operation Fightback” urged supporters to lodge complaints with the ASA over misleading Government claims made in its ‘man-made’ global warming ‘Action on CO2’ television adverts.

“These used the words ‘scientists agree’ in connection with disputed and in some cases, retracted, IPCC findings.

“Specifically Operation Fightback pointed out that the use of the words “scientists agree” implied that all scientists agreed with the now largely debunked IPCC claims made for “man-made” global warming, something which is manifestly untrue.”

There we have it: a systematic campaign by neo-fascist climate-denying BNP supporters seems to have achieved just what it wanted. To sum up, the BNP campaigned against these ads and the ASA did what the BNP were calling for.

It is worth noting also this SERA piece:

“While the ASA decision was dreadful, it is important to be clear nevertheless that the ASA did NOT uphold most of the complaints against this ad campaign.”

22 Responses to “BNP glee at ASA ban on climate ads”