Emboldened by the BBC’s capitulation to Murdoch with its commitment to slash the number of journalists on its website, he will now charge for online content. 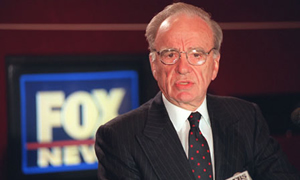 Emboldened by the BBC’s capitulation to Rupert Murdoch with its commitment to slash the number of journalists employed providing content for its terrific website, he has done it: from June this year, The Times and The Sunday Times will no longer be free online. The BBC had acted as a barrier to Murdoch’s ambitions to charge for the web. With the barrier breached others are waiting with baited breath to see if it will work.

Let’s get one thing straight: the decline of newspaper sales is a structural problem – the internet is merely a component. As John Nichols has written in The Nation:

“Blame has been laid first and foremost on the Internet, for luring away advertisers and readers, and on the economic meltdown, which has demolished revenues and hammered debt-laden media firms. But for all the ink spilled addressing the dire circumstance of the ink-stained wretch, the understanding of what we can do about the crisis has been woefully inadequate.“

Charging for content is not the answer. While, unlike America, we have more of a spread of newspapers. The Guardian, albeit protected as it is from its Trust status, provides quality alternative coverage. Nevertheless as consumers of news we can ask why did our journalists, with some honourable exceptions, fail so miserably in forecasting the global economic crisis? Could it be that it was in the media bosses’ interests to go along with the orthodoxy of an unfettered free market?

Likewise the line on weapons of mass destruction in Iraq was bought hook line and sinker with Murdoch’s titles in particular all supporting the war.

There has been an economic decline in newspapers, there has also been a decline in content exacerbated by cost cutting in the number of journalists employed. Critical inquiry on the two of the defining issues of our times went absent without leave. Arguably, while newspapers become views papers, then people may want to pay for comment. The specialist information of, say the Financial Times and the Wall Street Journal, would be worth paying for.

But who under 30 is going to pay for general news? As the House of Lord select committee on communications reported:

“Younger people are less likely to read a newspaper than any other age group. The figures we [the select committee] commissioned from the National Readership Survey showed that overall the number of people reading any one or more of the top ten national newspapers on an average day has declined by 19% (between 1992-2006), but this decline is much more marked in the younger age brackets.

And young people, used as they are to free content online, won’t start paying now.

This week has also seen another twist in media ownership with Andrei Lebdev buying the Independent. With perfect timing on the day Murdoch announces he is going to charge for website content it is being asked whether Mr Lebedev’s Independent may follow the Evening Standard, and become a free-sheet. The Independent, despite Murdoch’s predatory pricing that once was used to try and strangle competitors, survived.

And while at times it has had to cling on for dear life, it has survived through journalistic content that provides alternative opinions. Reform of media ownership is back on the agenda. Trying to get people to pay for content and access to information on the Internet is not the model we should be following.