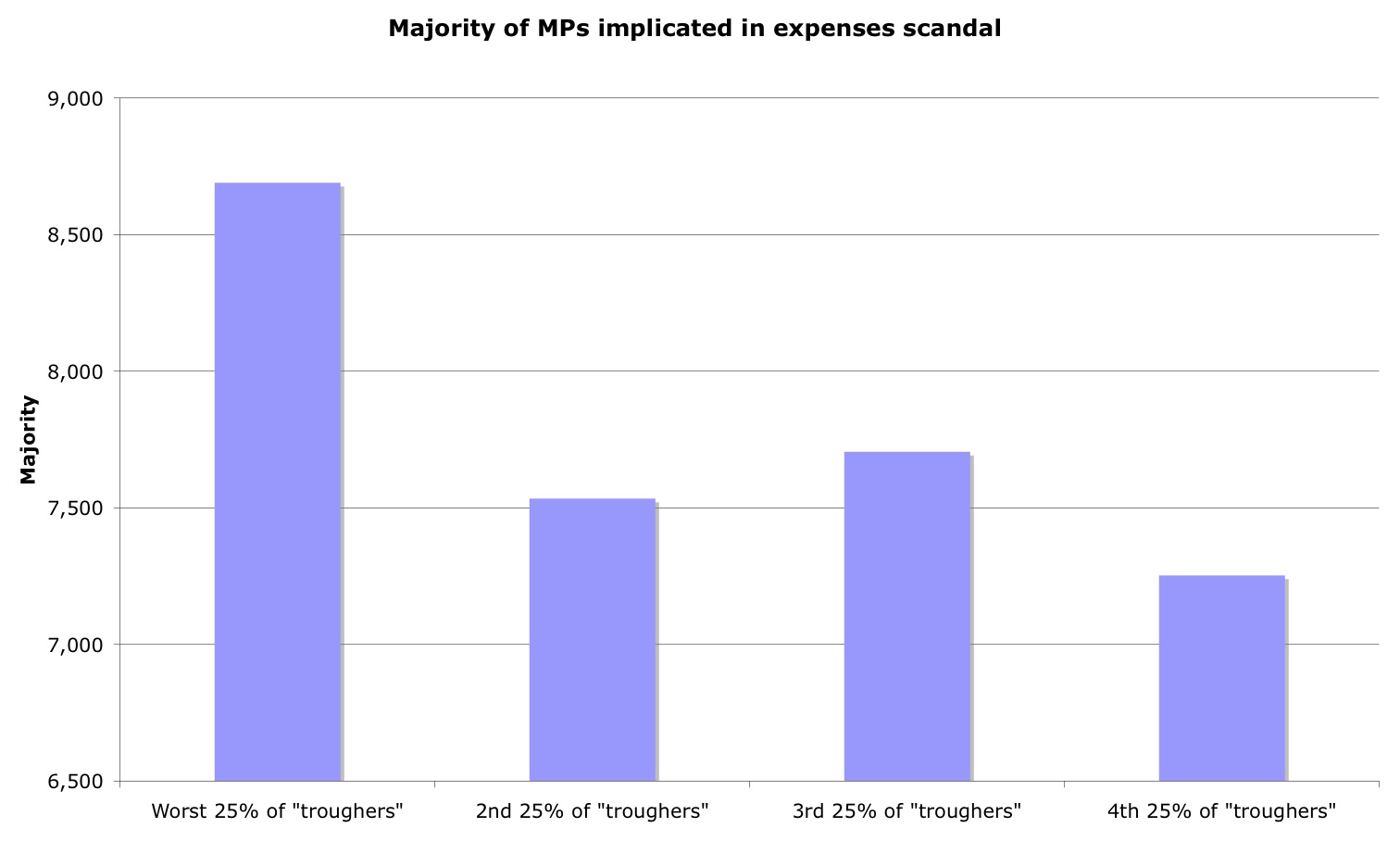 This post is co-written by Mark Thompson and Will Straw. It is cross-posted at the Mark Reckons blog

Last May, Mark did a series of blogposts which analysed the data from the expenses scandal and suggested that there could be a link between the first-past-the-post electoral system and the likelihood of an MP being involved in the scandal. New evidence from the Legg report suggests this is the case.

As the graph below shows, the average majority of the worst offenders is higher than that of those expenses-sinners who wrongly claimed smaller amounts.

Mark’s first post was published on May 17 at which point The Telegraph had named 74 MPs. The second post (an update to the first one) was published the next day and the number of MPs implicated was 94. The methodology used was that if an MP had been mentioned negatively at all in The Telegraph’s coverage with relation to expenses then a 1 was put next to their name otherwise there was a 0. The groups of MPs were then split up into quartiles ordered by how safe their seat was. The initial analysis suggested that MPs in the safest seats were 3 times as likely to have been implicated in the scandal as those in the least safe. A further update a week or so later by which point the number of MPs implicated had almost quadrupled to 243 suggested that the figure had come down to a bit less than 2 times as likely.

With the release of the Legg report yesterday – possibly the most definitive word we will get on the scandal – we decided to have another look at this situation and whether there still seems to be a link. The main problem is that more than half of all MPs are implicated in the scandal. There is also a disparity between the lowest erroneous claims, from Mike Gapes in Ilford who was asked to pay back 40p, and some MPs who are paying back £30,000 to £40,000. For this reason, and given all the data we now have, the original methodology seemed a bit blunt. Using Mark’s original analysis, there is still an observable effect but it is now very small (there are 87 MPs in both the safest and second safest quartiles, 74 in the third and 80 in the safest) as the Chart below shows. 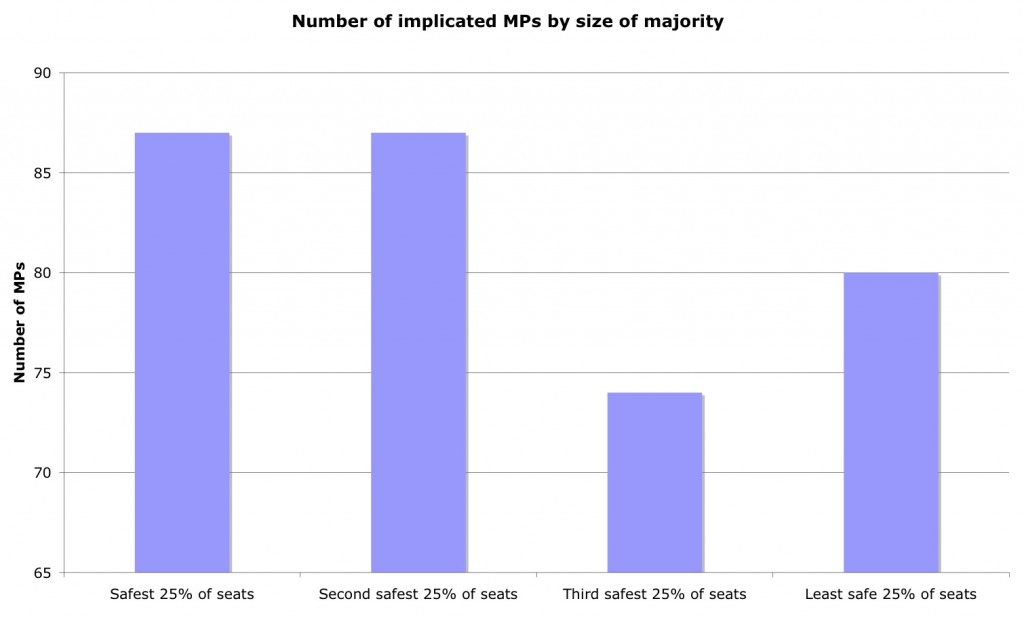 In the original Telegraph data it was not possible to be robust about the amount of money MPs were going to have to pay back. This is because the amounts were not always listed or were disputed. Now, however, we have all the amounts down to the very last penny.

We thought about introducing a cut-off point to isolate the worst expenses excesses. If you take only those MPs who claimed £5,000 or more then the ratio of 2-1 between the highest and lowest quartile is still there (the figures are 21 MPs from the safest quartile, 13 in the second, 11 in the third and 11 in the safest). The selection of the cut-off point though is arbitrary and hence probably not greatly robust.

So in order to try and find a better way to see if the safety of an MP’s seat could be correlated with the amount of expenses money claimed we listed the 328 MPs who (after appeals and adjustments) have been asked to pay money back and ordered them by size of payment. This way we are now taking into account this wide range of difference in amounts paid back and including all the implicated MPs.

We then split this data into quartiles and looked at the average size of the majority for the MPs in each quartile. What we found is that for MPs in the top quartile (including Barbara Follett, Andrew Mackay, and many of the most controversial claims) the average majority is 8,678. In the second quartile the average majority is 7,534. In the third it is 7,705. And in the lowest quartile (including people like Mike Gapes and his 40p) the average majority is 7,276. So there is a fair bit of difference here but there is another point to note. The average size of majority for all 328 MPs implicated is 7,798 (7,613 for all MPs). This means that the top quartile is quite a way above this average (by nearly 1,000 depending on from which point you measure it) and the bottom quartile is a fair way below it (by close to 500). The two middle quartiles are clustered near the average(s).

As with Mark’s original posts, there will likely be debate over what these figures tell us the degree of statistical significance, but we feel that, at the margin, they show that there is a link between the expenses scandal and the size of an MP’s majority. Of those MPs implicated, on average the safer their seat, the more they wrongly claimed.

Credit: Jessica Asato and Bhumi Purohit of Progress for compiling the data.

For those interested in doing their own statistical analysis, the data is available here.