Leading Tory Chris Grayling claims there's been a "98% INCREASE in serious violent crime" - the true figure, however, is a 50% FALL in violent crime since 1995. 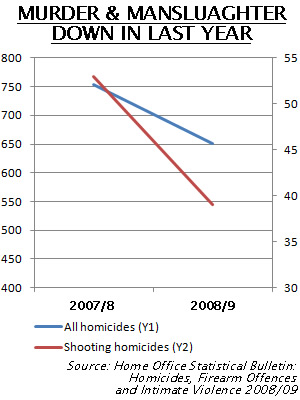 Chris Grayling’s attack on the British Crime Survey (BCS), which he described as “fundamentally flawed” on the Today programme this morning, is unravelling fast. Living up to his reputation as the weak link in the Tory line-up, he claimed there had been a “98 PER CENT INCREASE in serious violent crime” – the true figure, as the BBC’s Mark Easton reminded him, is a “50 PER CENT FALL in violent crime since 1995”.

He also claimed the BCS “didn’t take account of crimes committed by people under the age of 16” – again, the Shadow Home Secretary is simply wrong.

Not only were crimes committed by under-16s against adults already included in the survey, but from last January – January 2009 – the experiences of under-16s were included as well.

Grayling also said a major flaw of the survey was that it didn’t include murder or manslaughter. Using the figures which do include those crimes, however, reveals a downward trend – a fact Grayling failed to mention, claiming that “since the start of the decade there have been steady year-by-year increases in violent crime”.

As Left Foot Forward reported last month, the “Home Office Statistical Bulletin: Homicides, Firearm Offences and Intimate Violence 2008/09” shows a 14 per cent fall in homicides year-on-year, from 753 to 651 – the lowest level for ten years – with shooting homicides down 26 per cent since 2007/8 from 53 to 39.

• Listen to Grayling’s interview and read the transcript.

Andrew Pakes, Labour PPC for Milton Keynes North, has told Left Foot Forward that the Tories’ false claims that there had been 6,000 violent attacks in Milton Keynes in 2008/09 – a 236 per cent increase, equivalent to a violent attack every 90 mins – were a “disgraceful attempt” to play politics with crime.

“It is incredible to see just how far the Tories are prepared to go in manipulating the figures for their own partisan gain. No wonder the local police and BBC felt the need to speak out on this issue and make clear that the Tories were misleading the public.

“I am really proud of the work done by our local police and their dedication to helping make our city a safer place to live. This is a disgraceful attempt to play party politics with crime and the fear of anti-social behaviour. The Tories should start standing up our city and not simply spinning for his party bosses in London.”

26 Responses to “Weak link Grayling: Wrong on the facts, wrong on the stats”