Today's Daily Express front page criticising Housing Minister John Healey is yet another example of the Express at its hypocritical, biased worst. 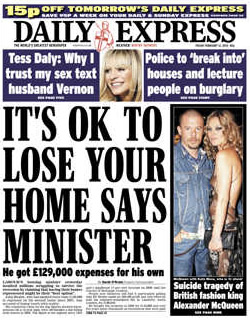 Today’s Daily Express front page attack on housing minister John Healey – saying he “insulted” struggling homeowners in a radio interview – is yet another example of the Express at its hypocritical, biased worst.

• Is written by the wife of the Tory housing renewal minister

• Criticises his expenses – the author making no mention of her husband’s house “flipping” and £66,000 expenses claim, including £3,000 for a “Berber” carpet and a £300 pool cleaning bill

Report author Sarah O’Grady is the wife of the Conservative MP for Peterborough, Stewart Jackson, shadow minister for communities and local government since January 2008.

He has responsibility for the fire service, flooding, housing renewal areas and the Thames Gateway and is currently writing a green paper on regeneration for the Tory manifesto.

Her report quotes Healey’s remarks in the BBC radio interview:

“For some people it can be the only, and it can in fact be the best, option for them to allow their home to be repossessed. Sometimes it is impossible for people to maintain the mortgage commitments they’ve got. It may be the best thing in those circumstances.”

“It’s OK to lose your home”

On repossessions, O’Grady writes that:

“The figure is the highest since 1995 and a significant 15 per cent increase on 2008, said the Council of Mortgage Lenders.”

Yet once again, the Tory housing renewal minister’s wife fails to put this in context. Comparing recent years with the early nineties, the figures show that:

In the three years following his election in 2005, O’Grady’s husband claimed £66,722 for their house.

He also claimed more than £1,300 for “household expenditure” from John Lewis, bedding, kitchenware, lightbulbs and £200 for a new refrigerator. Additionally, O’Grady’s husband claimed £3,000 for a “100 per cent wool berber carpet” for the house and £741 for a king-size bed – both of which, presumably, she benefited from.