In 2005, 15 EU countries committed to spend 0.51% of GNI on international development by 2010. Britain is among the majority of countries to have met the target. 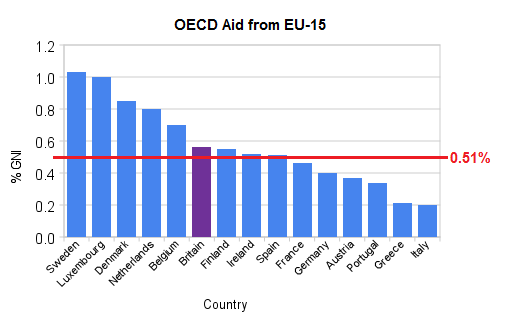 In 2005, the 15 EU countries who are members of the OECD Development Assistance Committee (DAC) committed to spend 0.51 per cent of Gross National Income (GNI) by 2010. Today, the OECD reported that Britain was among a number of countries to have met that commitment but centre-right governments across Europe are falling behind.

Other DAC countries made varying ODA commitments for 2010, and most, but not all, will fulfil them:

• The United States pledged to double its aid to sub-Saharan Africa between 2004 and 2010.

• Canada aimed to double its 2001 International Assistance Envelope level by 2010 in nominal terms.

• Australia aimed to reach $A4 billion.

The OECD projects that all four countries appear on track to meet these objectives. Meanwhile, Norway will maintain 1 per cent GNI spending, and Switzerland will likely reach 0.47 per cent of its GNI. The net result is that overseas aid will reach record levels in 2010, a 35 per cent increase since 2004. But despite this success there will be a significant shortfall as several major rich countries – including three centre-right led countries: France, Germany and Italy – have missed their 0.51 per cent targets, while Japan is $4 billion short of the $10 billion it pledged.

Overall, this means that while aid has increased by $27 billion on 2004 levels, OECD countries are $21 billion short of what they promised in 2005. This is partly because lower-than-expected GNI because of the economic crisis, but it is mainly because certain rich countries have failed to meet their commitments. Eckhard Deutscher, Chair of the DAC, noted that:

“Aid has increased strongly as 16 donors have honoured their commitments. But it will still fall considerably short of what was promised. These commitments were made and confirmed repeatedly by heads of governments and it is essential that they be met to the full extent.”

“Keeping our aid promises has never been more important as the world emerges from an economic crisis that has dragged millions of people back into poverty. I am very pleased that the OECD recognises that the UK is honouring pledges made at Gleneagles in 2005 – particularly on doubling aid to Africa.

“It is disappointing that with only five years left to meet the Millennium Development Goals there is such a shortfall in the levels of aid needed to meet them. It is now vital for other nations to step up to the plate. All governments are currently facing difficult choices but commitments made to the world’s poorest people must not become empty promises.”

“Overseas aid is more important than ever in the midst of an economic crisis that is pushing millions more people into poverty. The missing $21 billion could pay for every child to go to school, and could save the lives of 2 million of the poorest mothers and children.”

The shortfalls of aid commitments will reinforce the calls by campaigners for a Robin Hood Tax. The Financial Transaction Tax would offer a more regular and reliable source of vital funds needed to provide the sort of long-term predictable aid needed to support developing countries build poverty alleviating institutions such as national health and education systems.