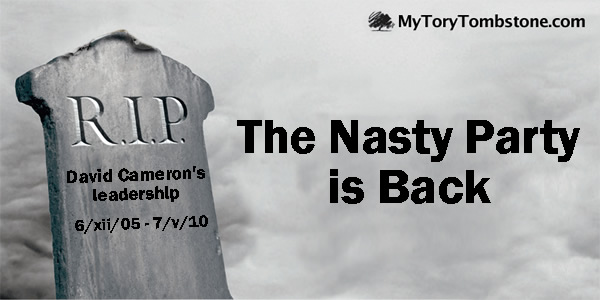 A new Conservative party poster appeared to be backfiring last night with a range of media commentators attacking the ad and a new spoof site set up to parody the campaign.

Trailed on Conservative Home yesterday, a new posted outlining that, “Now Gordon wants £20,000 when you die” will appear at 18 sites nationwide. But writing on the Spectator’s Coffee House blog, Peter Hoskin describes the poster as “disingenuous”:

Andy Burnham this morning denied the death tax claim with the words, “The Guardian story suggests a £20,000 flat levy. I’m not currently considering that as a lead option for reform.” Sure, the Health Secretary has left himself some wiggle room – he could still introduce the levy.  But the fact remains that the death tax isn’t current Labour policy.  It may never be.  And it’s disingenuous to suggest otherwise.

On politics.co.uk, Alex Stevenson writes that Andrew Lansley’s decision to push the death tax line even after Burnham’s statement was “only a flimsy covering over the scare tactics so keenly seized on by the opposition.” On Sky’s Boulton & Co. Miranda Richardson says, “It seems a somewhat wishy-washy basis on which to campaign.”

Clifford Singer, the man behind the viral MyDavidCameron spoof poster site, quickly launched a MyToryTombstone site. An online generator will be in place soon but in the meantime, the graphically skilled can email their posters to [email protected].