In a interview on the FCO website Rear Admiral Morisetti has said climate change is a threat multiplier and could be "the tipping point to cause conflict". 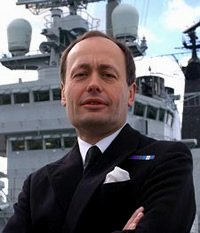 In a video interview on the Foreign Office website Rear Admiral Morisetti has said climate change is a threat multiplier and could be “the tipping point to cause conflict”.

He explained this “tipping point”:

“Climate change on its own is unlikely to start a conflict, but when you add it to all the other stresses you see around the world – food shortages, water shortages, poor health, loss of livelihood, weak governance – there’s a potential for it to be a tipping point to cause conflict.”

Pentagon officials also recently concluded that global warming will act as an “accelerant of instability and conflict”, ultimately placing a burden on civilian institutions and militaries around the world.

A secret Pentagon report that was leaked to The Observer back in 2003 concluded of climate impacts that:

“Disruption and conflict will be endemic features of life… Once again, warfare would define human life.”

Meanwhile, Fox News blow-hard Glen Beck, somebody who proclaims to be an American patriot and care about national security, invited climate scientists to kill themselves.

Morisetti’s staff appointments include three Ministry of Defence tours, in the Resources and Plans area, and as Director TOPMAST he was responsible for developing the manpower system for the Future Navy.

Promoted to Rear Admiral in November 2005, he was appointed Commander, UK Maritime Force – the Royal Navy’s standing Maritime Component Commander, a position he held until July 2007.

During this period he spent much of his time in the Middle East and acted as the NATO High Readiness Force Maritime Commander.