When the Parliamentary Standards Bill was introduced, it contained a clause stating parliamentary privilege did not prevent evidence being admissible. 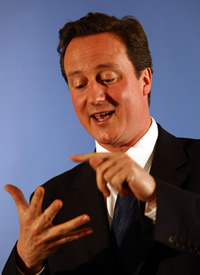 With his poll lead slipping, his team’s competence questioned and his policies under attack, David Cameron today stands accused of “breathtaking” hypocrisy over his comments on the expenses scandal. In a speech on rebuilding trust in politics the Conservative party lead sought to portray himself as “the change Britain desperately needs”, criticising Gordon Brown for being a “roadblock to political reform”.

His record since the scandal broke, however, belies such rhetoric, Left Foot Forward can reveal.

When the Parliamentary Standards Bill was introduced in the Commons on June 23rd, it contained a clause stating parliamentary privilege did not prevent evidence being admissible in proceedings against an MP for an offence in the Bill – a clause deleted after opposition from the Conservatives and Liberal Democrats.

Speaking in the debate, then Shadow Leader of the House Alan Duncan had said:

“We still have concerns about clause 10, which creates a formal provision to allow proceedings to be admissible in court proceedings against an MP, regardless of parliamentary privilege…

“Inasmuch as IPSA has power over our allowances, we are largely content, but inasmuch as it muddies the water and empowers the courts to intrude on our independence of action, it must be resisted.

“Even more dangerously, as the Clerk goes on to suggest, the casual disregard for parliamentary privilege in the Bill, particularly in clause 10, could cause permanent damage to parliamentary proceedings.”

“David Cameron’s position this morning is breathtaking for its sheer hypocrisy. Just a few months ago the Conservative Party were actively sabotaging all efforts to exclude the ambit of parliamentary privilege from the new laws on MPs expenses.

“Now Mr Cameron’s lust for an easy headline has provoked yet another bout of rank opportunism. The British public will see right through it.”

David Cameron and Liberal Democrat leader Nick Clegg are among those who voted against the proposals on reforming parliamentary privilege.

Concerns have also been raised as to whether Mr Cameron’s outspoken remarks will prejudice any future trial against the three MPs – Jim Devine, David Chaytor and Elliot Morley – and Tory peer Lord Hanningfield, all of whom have been charged with theft by false accounting, with Labour Deputy Leader Harriet Harman warning him:

“He’s got to be very careful what he says or his comments might actually jeopardise the trial and nobody wants to see that happen.”