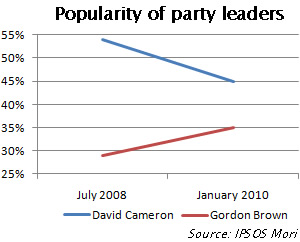 After Labour’s landslide victory in 1997, the Conservative Party struggled to find a smooth and marketable leader whom the public would find attractive. William Hague’s baby face and baldness did him no favours with the press, nor did his experiments with a baseball cap.

IDS is barely remembered and Michael Howard often needed to justify why he was running for Prime Minister and not spending more time with his grandchildren.

When David Cameron was chosen party leader in 2005, the Conservatives now had an electoral asset. He looked more like Tony Blair and his popularity ratings were higher than those of his party.

It now seems however that David Cameron’s shine is rubbing off. An Ipsos Mori poll that was mentioned by UK Polling Report but barely noticed by the mainstream press shows that:

• David Cameron’s popularity has dropped 9 points to 45% since the last time this question was asked back in the summer of 2008.

Cameron’s popularity, at that time, was 54% – 12 points higher than that of his party.

It is still 3 points lower than Labour at 38% but a solid improvement nonetheless.

Although there is no clear cut explanation for this trend, some polls suggest that whilst Cameron does well on some personality tests, he falls down on poll questions which ask whether the Leader of the Opposition is ‘all spin not substance’.

This was picked up both by a YouGov poll in September 2009 and a Guardian ICM poll in November 2009.

This shouldn’t be too surprising. Conservative lightness on policy is something regularly commented on – even by the Tory faithful; this week it was the turn of James Forsyth, deputy editor (online) of the Spectator.

Overall, it raises the question of whether the constituents of Bethnal Green and Bow are the voice of the future when recently at Aldgate East Tube Station they suggested to Cameron that he might care to go back to Eton.

Our guest writer is Felix Grenfell Bozek, an intern at the Fabian Society