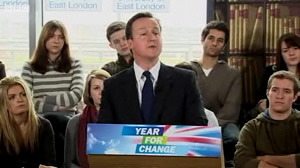 The student union president of the university at which David Cameron gave a major speech on rebuilding trust in politics has accused the Conservative party leader of bussing in a crowd of “baby-faced” young Tories to sit behind him.

“They are not our students. Afterwards I spoke with one of them, and he said he had just joined the campaign a week ago and was learning how it worked.

“He only took one question from a student, and it wasn’t about education … he just talked about constitutional reform, which wasn’t of interest to most students.”

Bitrus explained that students and staff had asked him who the people sat behind Cameron were:

According to data from the UEL planning unit, more than half the university’s students are from ethnic minorities. The most recent figures available show that in 2004/5, 59 per cent of home students were non-white.

As of July 2005, added the “Race Equality Scheme” progress report, black and minority ethnic staff represent 23 per cent of the total workforce, and 18 per cent of academic staff.

Cramming public events with your own supporters is nothing new. In the last election campaign, reported the Guardian in 2005, Labour was accused of “hiring a sympathetic ‘rent-a-crowd’ to shield Tony Blair from hostile voters“.