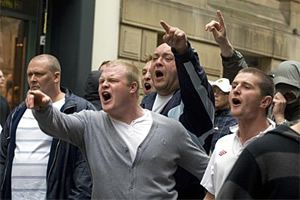 Last Saturday hundreds of Muslim civic and community leaders joined together during a public meeting in Birmingham to discuss the growing spate of unchallenged hatred and bigotry flourishing against British Muslims in our country. It took place on the same day that more than 1,500 supporters of the English Defence League (EDL) rioted in Stoke-On-Trent against the so called “Islamification of Europe”.

No less than six police officers were hurt and five police vehicles damaged as groups broke through police cordons, yet the story was hardly anywhere to be seen in our mainstream media. One wonders what the public, police and political reaction would have been if it was the other way round, if it was Muslims rioting and on a rampage.

There are growing levels of unchallenged attacks on British Muslims in many forms, with the fury continuing to mount. There have been cases of Mosques being vandalised, Muslim students being stabbed on university campuses and general anti-Muslim bigotry spiralling out of control without any rebuff.

Last week in Leeds, a bus driver was arrested after he allegedly called a female passenger a Muslim terrorist and asked her if she had put a bomb on his bus.

In Manchester, bereaved relatives have been forced to erect CCTV cameras at a cemetery after a series of attacks on Muslim graves, while on Boxing Day last year, a mosque in the West Midlands was burned to the ground by arsonists for the second time; these are just some examples of the overt attacks taking place against Muslims.

All over Europe, the far-right have come to realise that in today’s world, attacks on immigrants, blacks or Jews are no longer acceptable if they are to capture a mainstream following. Rather, it is much easier to target Muslims. The BNP’s Nick Griffin, who described Islam as a “wicked and vicious faith”, is already on the record as saying:

At a time when some of our journalists often embark on a battle between who can write the darker tale about Islam or Muslim life, the media coupled with a lack of political will and direction have created a situation where attacks on Muslims, overt and covert, have sadly become acceptable.

In July 2008 Peter Oborne illustrated how anti-Muslim sentiments had achieved a level of respectability in Britain that no other form of prejudice enjoyed. He wrote:

“While overt racism and anti-Semitism were unacceptable in modern society: the systematic demonization of Muslims has simply become an important part of the central narrative of the British Political class; it is so entrenched, so much part of normal discussion, that almost nobody notices.”

Following the devastating earthquake in Haiti, Muslim charities based in the UK immediately pledged to raise more than two million pounds in emergency relief while Muslim students raised more than £300,000 through ‘Charity Week’ at universities across the country for orphans around the world. But you will of course never hear stories of this sort. Because they bluntly do not fit the mainstream stereotype of a Muslim.

The overwhelming feelings at the public meeting called by the Muslim Council of Britain was one of frustration and anger that anti-Muslim sentiments and attacks were not being adequately addressed by both the police and our political class. Enough is enough; we must act.

The usual suspects will of course accuse us of playing the ‘victim’ card, but British Muslims call not for special treatment, but equal treatment. Just like any other community, we call for a concerted effort to challenge extremism of any form which concentrates itself against minorities in a bid to create divisions to the detriment of our society and our country.

Bigotry, hatred and attacks against British Muslims are nothing new. But its unchallenged growth in our country can no longer be ignored. The half-hearted response by the government to this growing phenomenon has been far from adequate to date. The phase for window dressing is over. Now is the time to act.

What is urgently needed is clear leadership from both our police and the government in policy directions in dealing with Islamophobia in all its forms.

In 2005, in response to growing levels of anti-Semitism, a Parliamentary Committee was established to combat the threat. Likewise, at a time when British Muslims are now the new target for hatred and attacks, it is high time a dedicated committee is now set up to investigate Islamophobia in our country.

At a time when we join hands together in remembering the evils of the Nazi Holocaust, it would be most fitting to leave Carly Whyborn of the HMD Trust with the final say who, on Holocaust Memorial Day, referring to the treatment of minorities in Britain, said:

“We can pause to look at how we treat those around us. We can all make the choice to challenge exclusion when we see it happening – we can choose to stop using language that dehumanises others and we can stop our friends and family from dehumanising and excluding others.”

Our guest writer is Kawsar Zaman, law student at the LSE