David Cameron's education plans are practically the same as three years ago - and his headline measures on teacher training will make little or no impact. 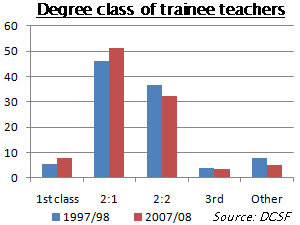 This morning, the Conservatives launched the second in their series of draft manifestos, this time focusing on education, ahead of Education Secretary Ed Balls’s Families Green Paper on Wednesday. The vast majority of the policy proposals contained in the draft manifesto can also be found in the Conservative’s 2007 Education Policy paper – a startling sign that nearly 3 years of deliberation has brought them no further in policy development.

One of the small number of new policy announcements is the new entry requirements for teaching. The Tories rightly say that teaching should be an “elite profession”, but their policy prescription – for teachers to have a 2:2 in order to qualify for state funding – will have little to no impact.

In 2007/08, the percentage of teachers with third class degrees in the first year of initial teacher training represented only 3.4 per cent of the total cohort, down from 4 per cent in 1998. In the same period, the number of those with first class degrees has increased to 7.8 per cent from 5.4 per cent and, for 2:1s, from 45.9 per cent to 51.4 per cent.

In short, Labour in government has succeeded in attracting a higher calibre of graduate into teacher training.

Noticeable also in Cameron’s speech was the absence of any reference to Swedish schools. Left Foot Forward highlighted some of the evidence against the Swedish Schools model in August and further evidence from the Trends in International Maths and Science Study (TIMMS) shows that England is ranked several places higher than Sweden in Maths and Science.

What is clear from both these pieces of evidence is that while the Academy style schools in Sweden produce some gains, this is not replicated in the mainstream schools, which represent about 90 per cent of schools in Sweden), which have been left to suffer.

A number of other suggestions in the manifesto document make disturbing reading. Once again, the Conservatives stress their commitment to “stop heads being overruled by bureaucrats over exclusions”. This first appeared in “Raising the Bar, Closing the Gap”, the Conservatives’ first policy green paper on education in 2007.

The Conservatives propose abolishing the independent appeals mechanism for children who have been permanently excluded, instead making the school’s governing body the final opportunity for appeal. Abolishing the independent appeals process makes the process by which Head Teachers can expel pupils far easier and risks the loss of an important check on the processes followed by both Heads and Governors.

It leaves open no mechanism for challenging these decisions, except through the courts. An option that would not be open to the families of most children facing permanent exclusion.

In September, Left Foot Forward highlighted the Conservatives’ opposition to the Government’s new Vetting and Barring System. This morning’s announcements introduce more fears about the Conservatives’ stance on child safety as they propose to “make it easier for teachers to use reasonable force to deal with violent incidents and remove disruptive pupils from the classroom without fear of legal action and give teachers the strongest possible protection from false accusations”.

It remains unclear how they intend to achieve this without weakening the protections afforded to children to ensure they are safe in school.