The Express reports that housing benefit payments will rise this year. The rise is due to the recession and rents, not a "culture of benefits dependency". 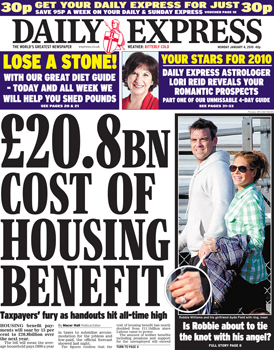 The Express this morning reports that “Housing benefit payments will soar by 15 per cent to £20.8billion over the next year.” They are right but the rise is due to the recession and rising rents, not the “culture of benefits dependency” that the paper cites.

The housing benefit bill will rise over the next few years but this is partly the result of more people being unemployed (and therefore eligible). A DWP spokeswoman is quoted saying, “These forecasts were done on a precautionary basis at the time of the Budget but, with unemployment 400,000 lower than predicted as a result of the action we have taken, we are already saving hundreds of millions of pounds in unemployment and housing benefit compared to those Budget numbers.” She is right: these predictions are based on budget unemployment numbers, which are likely to overestimate the peak by some 400,000. The eventual cost will be lower.

The higher bill is also due to the trend rise in housing costs, in both the social and private rented sectors. In the social sector this is because housing benefit basically tracks rents (which have been rising above the rate of inflation) and in the private rented sector because the local housing allowance has been more generous than expected. The latter is where these horror stories of people getting thousands of pounds a week on housing benefit have come from. DWP put out a consultation to deal with this problem at the end of last year.

The figures used by the Express for the growth in welfare spending since 1997 doesn’t distinguish between different types of spending. For example, a lot of the increase is in higher pensions, tax credits and child benefit. Little of the increase is due to increases in out-of-work benefits. And the Express citing “the failure to stamp out fraud and welfare addiction” misses the facts. Both fraud and error have come down substantially in recent years and are now at historically low levels.

Reforming housing benefit is the toughest task in social policy. The Government is right to control spending in the private rented sector by taking out the very highest rents from the calculation used to work out the going rate in an area. Beyond that the solution really lies in looking at the public subsidy for housing as a whole – on both the supply and the demand side – because the rise in housing benefit is really due to increasing rents. Building more social housing in particular would certainly help to bring down the cost.

2 Responses to “The Express are wrong on housing benefit dependency”