The BBC's story today on Polish emigration is wrong. The evidence reported does not disprove the claim that half the Polish migrants since 2004 have gone home. 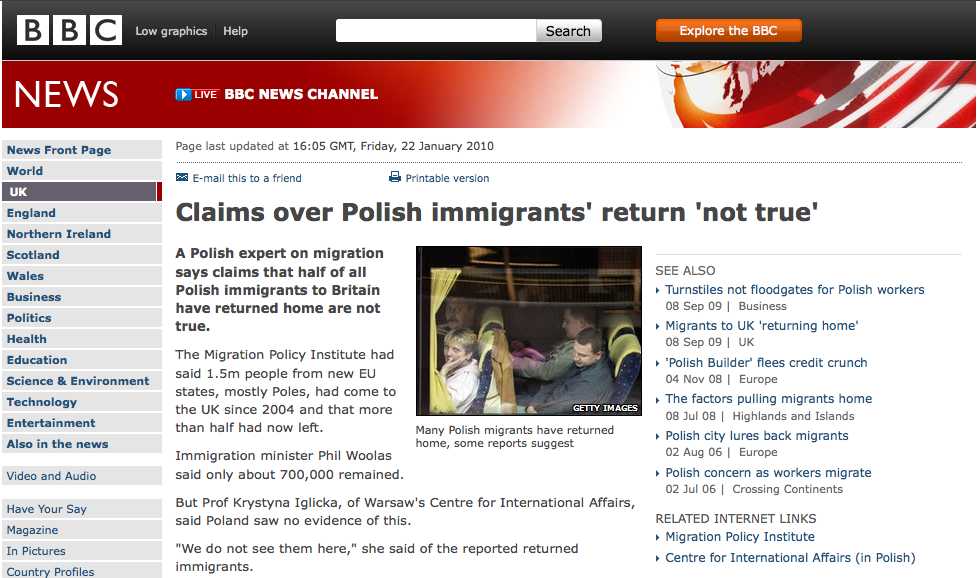 There has been a good deal of debate in the media today about whether Polish migrants to the UK are going home or not. Lots of statistics are flying around, and the BBC are running a story (on the front page of their website at the time of writing) which majors on the fact that a Polish academic has argued that:

This critique is of a recent report by the Migration Policy Institute which says that around half of the 1.5 million migrants from new EU member states who have come to the UK since May 2004 have since returned home.  This report used a methodology which was developed by ippr in a 2008 report, which came to a similar conclusion.

There is, as with all questions about migration, some uncertainty about the data. The main sources of data in the UK (the Labour Force Survey and the Workers Registration Scheme) are both imperfect measures of migrant populations, and no figures based on them are ever going to be wholly accurate, whatever adjustments are made by researchers. So, it’s entirely possible that data in Poland and data in the UK could tell a slightly different story. But the evidence from Poland reported by the BBC does not disprove the claim that around half of the migrants who came to the UK after 2004 have since gone home.

The BBC make great play of figures from the Polish Central Statistical Office which suggest that the numbers of Poles working abroad continued to rise until 2008, and then fell only very slightly. This is entirely consistent with the claim that around half of those who have come to the UK have since returned. To illustrate this, imagine that 100,000 Poles came to the UK every year, and 50,000 returned.  This would mean that half were returning, but there would still be net migration of 50,000 from the UK to Poland (i.e. the number of Poles living in the UK would be increasing by 50,000 a year).

The BBC report also points to the fact that relatively few returning Poles have registered with local labour offices in Poland.  It is entirely possible, though, that migrants who have been in the UK may be returning to employment, and not registering with labour offices.

This would be consistent with another piece of evidence cited by the BBC, that unemployment figures in Poland have remained stable.  However, the BBC coverage uses this fact rather differently – reporting claims from a Polish academic that an influx of Poles returning home would have affected the unemployment figures in Poland (and thus suggesting that stable unemployment means that Polish migrants aren’t returning). But if the flow of Poles returning was matched by more Poles migrating to the UK (net migration from EU accession countries to the UK was estimated by the ONS at only around 15,000 in the year to March 2009, but with about 78,000 arriving, and 64,000 leaving), the impact on the supply of labour in Poland would be small.  This argument also seems to be based on a basic misunderstanding of labour markets – the “lump of labour fallacy”. An increased supply of labour does not automatically lead to an increase in unemployment, because the number of jobs is not fixed, and there may be unfilled vacancies in the labour market. These are the same reasons that unemployment in the UK did not rise when the large numbers of Poles arrived in the UK in the first place.

Official UK figures show a dramatic 85 per cent fall in net immigration from new EU member states in 2008, but still suggest that net migration from Poland to the UK remained positive up to the first quarter of 2009 (which is the latest data available).  In fact, it would not be surprising if net migration to the UK from Poland and other countries in Eastern Europe had become negative during 2009/10, but this is not something that either ippr or MPI have claimed, nor, it seems, something that anyone in Poland would dispute.

This would seem to be another case of the media manufacturing a controversy where none exists.  The migration debate is too often cast in terms of claim and counter claim, when what’s needed is a clear understanding of the facts and a sensible discussion of policy.