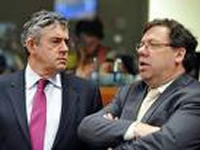 The Prime Minister and Taoiseach will hold crisis talks in Downing Street today to discuss the latest situation in Northern Ireland. Gordon Brown and Brian Cowen will meet this afternoon after Martin McGuinness and Peter Robinson sit down at Stormont at noon for what Sinn Fein are calling “defining talks”.

It follws the events of the weekend, which have once again exposed how quickly dynamics and moods can change in Northern Ireland Politics. On Thursday, Left Foot Forward reported that hopes were beginning to rise for a political deal on policing and justice, but by the end of the week, it was reported that talks between the DUP and Sinn Fein had ended without agreement.

At the weekend, Sinn Fein’s ruling executive, the Ard Chomhairle, met to discuss the situation on policing and justice, with the Financial Times reporting that the meeting would decide whether to withdraw Sinn Fein’s Ministers in the Northern Ireland Government in protest over the DUP’s failure to agree a timetable on devolving policing and justice powers.

“It would have been our hope when the Ard Comhairle was originally put back two weeks ago that we would have had something positive in terms of a resolution of current difficulties to put to this meeting. Unfortunately we are not in that position despite my very firm view that with the necessary political will all of these matters could and should have been sorted out before now.

“Within three months of the St Andrews Agreement, Sinn Féin had held an Ard Fheis on policing and had fulfilled our obligations. That was three years ago and we are waiting on the DUP to honour theirs.

“The failure thus far by the DUP to honour this St. Andrews obligation is symptomatic of a much bigger problem – their refusal to work partnership government, and in particular to work the office of OFM/dFM properly.

“Our negotiating team has been given a very specific brief. Martin McGuinness will be seeking an urgent meeting with Peter Robinson. This will be a critical and defining engagement.”

“The nature of negotiations is that one party can’t sit down and say ‘time is running short, it’s about time you came to our position’. Negotiations are about getting accommodation, working out a way that is suitable to all parties.”

And speaking ahead of the Downing Street talks, Mr Cowen said:

“Obviously the ideal situation here is for both Martin McGuinness as deputy first minister and the first minister Peter Robinson coming to agreement on these outstanding issues that have to be resolved and working with the other parties who are involved in the process as well.

“The governments have a responsibility as guarantors of the agreement to ensure that we get the agreement implemented. I’ll be discussing the matter further with the British prime minister to get this matter resolved as it’s important for the people of Northern Ireland.”

Meanwhile, David Ford, Leader of the Cross Community Alliance Party, used his speech at his party’s annual conference to warn that a failure to reach an agreement could serve to bolster Paramilitaries across Northern Ireland. The South Antrim MLA said:

“Devolving policing and justice is not just about giving extra powers to local representatives, it’s also about showing negative elements that devolution can work and giving the Executive the impetus to move forward on other important matters.

“We need all party talks to deliver a government free from delays, and we hope that a wide range of issues can be resolved within negotiations. The DUP and Sinn Fein have a duty to the public to engage seriously as we cannot countenance the prospect of failure on their part.

“They must also change their approach from crisis management to collective government. The people of Northern Ireland will tolerate knee-jerk politics no more – they want normal, functioning government.”

Many commentators have claimed almost every week over the past couple of months to be a momentous one for Northern Ireland; however, if a deal really cannot be done with UK and Irish Government involvement, it remains difficult to see how the devolved bodies could be saved from collapsing.