NGOs have responded to David Cameron's plans to "join up" the International Development and Defence budgets with dismay. 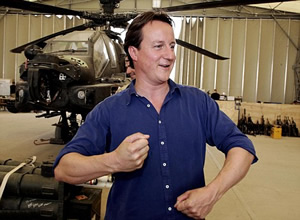 Left Foot Forward reported this morning on David Cameron’s speech outlining plans to “join up” the international development and defence budgets as part of his party’s National Security Strategy; we have contacted NGOs for their reaction to the speech.

“Removing aid from the poorest people and using it for military goals rather than tackling poverty would be a big step backwards and would undermine the UK’s leadership role on international development.”

Save the Children’s Director of Policy David Mepham added:

“We welcome David Cameron’s commitment to ring-fence the UK international development budget. However there is an urgent need for the Conservatives to clarify that the purpose of development aid is poverty reduction, not subsidising military operations.

“Save the Children is very concerned that the Conservatives’ security spokesperson, on BBC Radio 4’s Today programme this morning, left open the possibility of significant aid funds being diverted into stabilisation units.

“This dangerously muddles up security and development goals, increasing the risks facing development and humanitarian workers in conflict situations.”

Meanwhile, the New Statesman reported that:

“Cameron can expect a fight from NGOs if he tries to push all the government’s development efforts into mopping up after costly wars. He promised to maintain a 0.7 per cent share of gross national income for development spending.

“But, as Oxfam’s response shows, if this simply means taking funds away from current development projects to support his security strategy, it will be deeply unpopular.”