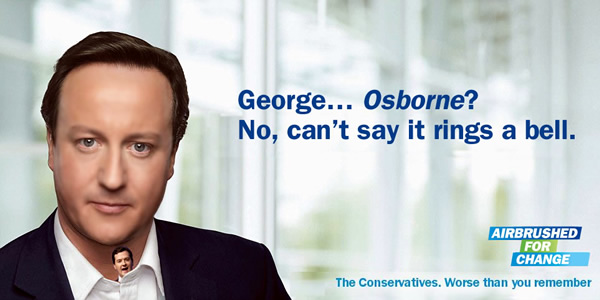 • There was continued confusion over David Cameron’s marriage tax plans this week, and in particular how he’ll pay for them, with the Telegraph reporting a “Tory tax on drivers to pay for marriage allowance”, a claim denied by George Osborne on the Today programme this morning – only for the Telegraph, a few hours later, to counter-claim that, according to an official document on the Conservative party website, the Tory leader has given:

“A commitment to increase the proportion of taxes collected from green taxation, with revenues from the new green taxes going into a families fund that can only be used to reduce other taxes on families.”

Confused? You’re not the only one. It’s been some week for the Shadow Chancellor, ripped to shreds at the Fabian Society conference last Saturday, disappearing from public view – prompting Labour List to ask “Where is George Osborne?” – being forced to repay £1,666 in expenses payments for over-claiming on his mortgage, and making that ill-fated appearance on Today, in which he also said his financial reform package was “Obama style“. (H/T: Anthony Painter)

• The Iraq Inquiry contiued to dominate Westminster, with Geoff Hoon and Jack Straw – the Defence and Foreign Secretaries at the time of the invasion – appearing before Sir John Chilcot. The big news, however, concerned those yet to feature, with the announcement today that the Prime Minister will make his appearance before the election not after it – as will Douglas Alexander and David Miliband – and the confirmation that his predecessor, Tony Blair, will appear a week today. More than 3,000 people applied for tickets to see Mr Blair, of which only 80 members of the general public and 40 relatives of fallen soldiers will be succesful.

• Cadbury’s £12bn takeover by Kraft has been the week’s other main story, with unions and politicians worried about the future of Cadbury’s UK workforce – though not all politicians. Tory MP and Shadow Fisheries Minister Bill Wiggin has called the workers “whingers“. On Tuesday Left Foot Forward’s Varun Chandra wrote:

“We should stop companies picking up British businesses when there is a risk that the terms of the acquisition could lead to job losses.”

“I would like my Creme Egg to continue to be British.”

General Sir Richard Dannatt, former Chief of the Defence Staff, who said Britan should keep Trident “but not forever” – a rebuke to Shadow Defence Secretary Liam Fox who was forced to defend his position, insisting the Tories “intend to maintain a minimum credible submarine based nuclear deterrent”. In November, Left Foot Forward detailed how scrapping Trident could free up about £45bn in the long term defence budget.

The National Institute for Clinical Excellence, which on Monday refused to approve for use in England and Wales a drug for the treatment of rheumatoid arthritis that is freely available in Scotland. The decision, reported Left Foot Forward’s Dr. Asif Sange, risks creating a ‘medical apartheid’ in Britain.

The TUC’s comprehensive rebuttal of the Daily Telegraph’s claim that average public sector pay is “more than £2,000” higher than the private sector average, a “gap of 3.6 percentage points”. As the TUC’s Nicola Smith pointed out on Left Foot Forward yesterday, this includes wages paid to those working in financial services, in the nationalised banks; the true gap is 2.7 percentage points. Dr. Ben Goldacre, writing in the Bad Science blog, has more – including the debunking of a Sunday Times claim that “Public sector workers earn 7% more on average than their peers in the private sector — a pay gulf that has more than doubled since the recession began.”

The Kraft acquisition of Cadbury – this received mainly negative sentiment, especially after it was revealed that RBS will be lending Kraft the money for the deal.

According to our friends at Tweetminster, the other top stories for the week were:

• The David Cameron posters (see above): 94,000 posters have so far been generated by andybarefoot.com – more posters made than questions asked to Dave around the draft manifesto – with MyDavidCameron.com receiving more than 100,000 hits.

• For Labour: most stories have rotated around the Iraq Inquiry – specifically will Gordon Brown give evidence before the General Election and pieces on alleged helicopter budget cuts; and the stories around Labour using taxpayers money (“the secret campaign fund”).

• For the Lib Dems: the top story was the PPC that resigned over the racist email and Nick Clegg’s comments around using social networks to communicate pledges to young people also received lots of attention.

Here are the latest tweets on Cadbury/Kraft:

@severincarrell: Kraft has insisted it will honour Cadbury’s current Fairtrade Daily Milk deal – just filed on this – but what for the future?

@vagueclues: Don’t worry about #Kraft buying #Cadbury‘s, Facebook groups will save the day.

@porschesrule09: @JoeyP103 Yes. Cadbury’s started with a single shop in 1824 while Kraft started with him selling cheese from a wagon in 1903.

One Response to “Look Left – The Week in Fast Forward”